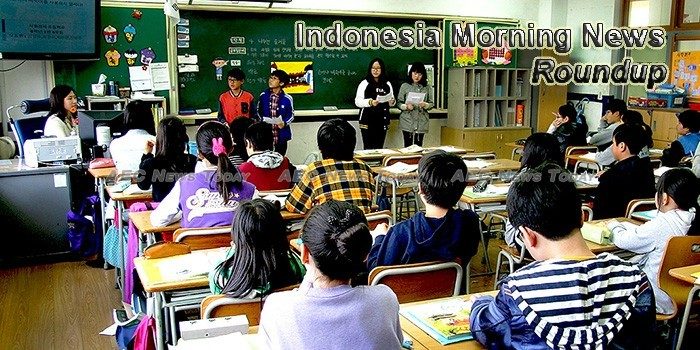 Widodo’s smoke and mirrors hide hard truths
Facilitated by a largely unquestioning media, Indonesian President Joko Widodo’s government has become a master at the game of smoke and mirrors, which in its simplistic form is all about convincing the public that things are happening when they really aren’t.
— Asia Times

Energy subsidy estimated at Rp 127.6 trillion this year
The Indonesian energy subsidy is estimated to reach Rp 127.7 trillion (US$10.22 billion) this year, or 0.2 percent from gross domestic product (GDP), due to increasing global oil prices.
— The Jakarta Post

Bank liquidity safe facing external risks
The country`s bank liquidity is safe and will remain safe despite external risks which might come with an increase in the fund rate of the US central bank, The Federal Reserves, the Deposit Insurance Agency (LPS) said.
— Antara

House Confident Pertamina Able to Raise Mahakam Block Oil Production
Vice Chairman of House Commission VII Herman Khaeron believes Pertamina is capable of managing the Mahakam Block, after the transfer of management from Total Indonesia earlier this year. Pertamina has sufficient experience and technology to re-raise oil production of the block which has plummeted.
— Netral News

Garuda Indonesia pilots demand management overhaul
Flag carrier Garuda Indonesia on Tuesday said it was targeting $8.7 million in net income this year, in an attempt to shrug off concerns over internal problems after pilots called for an overhaul of its management.
— Nikkei Asian Review

Pelindo 1 to Build 4 Industrial Estates in Sumatra
State port operator Pelabuhan Indonesia I or Pelindo 1 will work on four industrial estates in Sumatra. The project’s development has reached the land acquisition stage and the preparation of the Detail Engineering Design (DED).
— Tempo

Indonesia set to operate 13 railway projects this year
The Indonesian government will operate 13 new railway routes, which are currently being constructed, including several airport railway services.
— The Jakarta Post

Indonesia Looks to U.S. to Relax Limits on Its Special Forces
Indonesia said on Tuesday it was pinning its hopes on U.S. Defense Secretary Jim Mattis to help ease American limitations on ties with an elite Indonesian special forces unit, imposed over human rights abuses in the 1990s.
— U.S. News

Indonesian Economy Set to Maintain Positive Outlook in 2018
The Indonesian economy is expected to maintain a positive outlook this year, on the back of a domestic recovery and changing monetary policies by the world’s major economies, Finance Minister Sri Mulyani Indrawati said on Tuesday (23/01).
— JakartaGlobe

US Gov’t Shutdown Unlikely to Impact Indonesian Economy: Minister
The United States government shutdown will not have a significant impact on the Indonesian economy if it lasts for only a short time, because export markets rely on the private sector, a minister said on Monday (22/01).
— JakartaGlobe

Indonesia ready to build International Islamic university
Indonesia is set to build a university later this year in what its president and observers say is an attempt to counter Islamic extremism at home and spread peaceful Muslim values throughout the world.
— UCA News