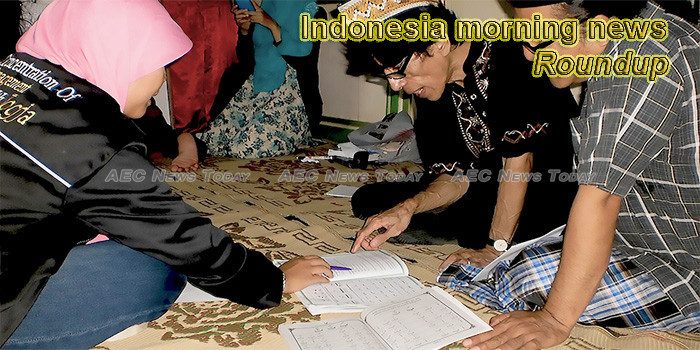 The Man Taking on Boeing With a $22 Billion Jet Order at Stake
The crash of a Boeing Co. plane that killed 189 people in Indonesia is spiraling into a $22 billion feud between the aircraft maker and one of Asia’s most influential aviation bosses.
— The Edge Markets

Indonesia’s Soputan volcano erupts, ejecting thick ash
A volcano in central Indonesia has erupted, ejecting columns of thick ash as high as 7,500 meters (24,606 feet) into the sky.
— The Mainichi

Papuan Villagers Flee to the Forest to Hide from Fighting
At least 300 villagers have hidden in a forest in the Papua province on Friday. They fled due to the fighting between soldiers and separatists who killed a group of workers building a bridge in the area this month.
— Indonesia Expat

LIPI: 400,000 Tons Plastic Waste Enter Ocean per Year
Researchers of the Indonesian Institute of Sciences (LIPI) reported a study regarding waste in 18 beaches and 13 coastal areas in the country. It was revealed that 100,000 to 400,000 tons of plastic waste entered the Indonesian sea per year.
— Tempo.co

Gestures to please Jewish voters backfire on Australian prime minister
Australian PrimeMinister Scott Morrison, in a wishy washy speech has back-tracked from an all-out commitment by Australia to move its embassy in Israel from Tel Aviv to Jerusalem.
— Indonesia News

Jokowi asks Babinsa to monitor use of village funds
President Joko Widodo has asked non-commissioned officers in charge of village supervision (Babinsa) across the country to help assure that all the village funds provided by the government are used maximally for village development programs.
— Antara News

Forest farmers called to plant prime commodities
President Joko Widodo (Jokowi) called on recipients of the Social Forestry Decree certificate in Jambi on Sunday to develop prime commodities to give an impact to economic development of the middle-to-low income group.
— Antara News

Blue carbon focus could sail Indonesia through Paris targets
The next U.N. climate talks will be known as the “blue COP,” said a top mangroves expert at the COP24 conference venue in Katowice, Poland, where thousands of delegates from around the world are trying to forge an agreement over how best to tackle global warming.
— Forest News

Groundbreaking of Jakarta’s first incinerator slated for next week
Construction of the first and long-awaited incinerator in Jakarta will begin next week, an official has said.
— The Jakarta Post

Polri Send Personnel to Africa as Part of Peace Mission
The Indonesia National Police (Polri) have sent personnel to five countries in Africa and Haiti as part of the peace mission conducted by the United Nations (UN).
— Netral News

Komnas HAM urges owner of ransacked home to take legal action
The National Commission on Human Rights (Komnas HAM) has urged the parents of a man alleged to have been involved in the assault of military personnel to file a police report after their home was ransacked by an unidentified mob on Tuesday.
— The Jakarta Post

Warning for Aussies travelling in Indonesia
Australia yesterday warned citizens to take care while travelling in neighbouring Muslim-majority Indonesia ahead of Canberra’s expected but contentious move to recognise Jerusalem as Israel’s capital.
— The Straits Times

TNI seeks evidence on personnel’s involvement in mob attack
The Indonesian Military (TNI) has asked the public to report any involvement of its members in the ransacking of a house that belonged to the parents of a man accused of assaulting two military personnel earlier this week.
— The Jakarta Post