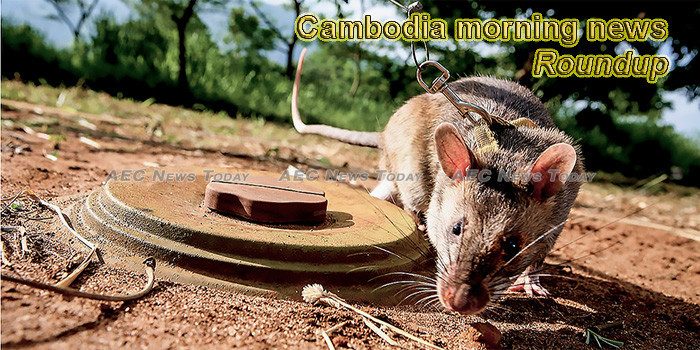 2018 Cambodia-US Trade in Goods: $3B in Total, Cambodia Exports US$2.8B to US
Cambodia and the United States trade in goods has reached $3.2 billion in the first nine months of 2019, up 39 per cent compared to the same period in 2017, according to the report on Cambodia-US Trade of Cambodian Commerce Ministry’s Statistics Department released on Wednesday.
— Fresh News

Cambodia to boost clean energy use – but coal plants planned too
Cambodia will push ahead with plans to use hydropower and coal to electrify the entire country by 2020, but solar energy will play some role, especially in remote areas, an energy ministry official said on Wednesday.
— Reuters

Ministry explains budget
The Economy and Finance Ministry yesterday defended a proposed increase in next year’s national budget, saying that it is in line with the nation’s economic growth.
— Khmer Times

UAE extends $500 million credit line to Cambodia
The United Arab Emirates yesterday announced it will give Cambodia $500 million in credit to buy and import products from the emirates.
— Khmer Times

Security upped for Independence Day
The National Police yesterday laid out security plans to ensure safety during the 65th anniversary of Independence Day on Friday, noting that the event will be attended by about 25,000 officials and will be watched over by nearly 10,000 security forces.
— Khmer Times

China claims intent to buy more from Cambodia
China has stated it will endeavour to increase the volume of products it imports from Cambodia. In a meeting last week with Prime Minister Hun Sen in Phnom Penh, the vice-chairperson of the Standing Committee of the National People’s Congress, Zhang Chunxian, said Cambodian products have “great potential”.
— Fresh Plaza

UN experts legitimize Hun Sen’s rights violations
United Nations Special Rapporteur Rhonda Smith is in Cambodia, but officials there are denying her access to Kem Sokha, leader of the banned opposition, who was released on bail a year after his arrest on treason charges in September 2017. This is a good time to look at how the UN’s experts’ actions legitimize Hun Sen’s authoritarian regime.
— Asia Times

Agreements to preserve ancient artefacts
Two deals on cultural cooperation in Cambodia were signed yesterday between the United States embassy and the Culture and Fine Arts Ministry.
— Khmer Times

Cambodian PM Hun Sen Asks Relevant Ministries to Examine Union Cases (Video inside)
Cambodian Prime Minister Hun Sen asked the Ministry of Justice and the Ministry of Labor and Vocational Training to examine the legal cases of union leaders, either the cases be dropped or hurriedly sentenced, addressing to 23,466 workers from 20 factories in Takeo province on Wednesday.
— Fresh News

Government ‘wants RFA and VOA reopened’
Minister of Information Khieu Kanharith told the outgoing US ambassador on Tuesday that the government intended to reopen Radio Free Asia (RFA) and Voice of America (VOA) for “effective communication and to promote freedom of the press in Cambodia”, local media reported.
— Phnom Penh Post

Stung Sen wetlands now a Ramsar Site
The government has designated the 9,293 hectare Stung Sen, a unique wetland along the Tonle Sap, as Cambodia’s fifth Ramsar Site recognised by the Secretariat of the Ramsar Convention on Wetlands through a sub-decree signed by Prime Minister Hun Sen on Friday.
— Khmer Times

Cambodian Villagers Blocked From Petitioning For Lost Land
Hundreds of Cambodian villagers trying to submit petitions over land disputes were blocked from approaching government offices and the residence of Prime Minister Hun Sen on Tuesday, with some ordered into minivans to be taken back to their home provinces, sources said.
— Radio Free Asia

Cambodia Looking into Issue of Overcrowded Prisons
Cambodia is looking thoroughly into the issue of overcrowded prisons in order to live up the country’s commitment to the human rights.
— Agence Kampuchea Press

Longboat on record course
The Union of Youth Federation of Cambodia (UYFC) announced that the boat to break the Guinness World Record for longest longboat is finished. The official measuring will be on November 12 in Prey Veng.
— Khmer Times

This week’s Cambodia morning news feature photo acknowledges International Day for Preventing the Exploitation of the Environment in War and Armed Conflict, November 6.