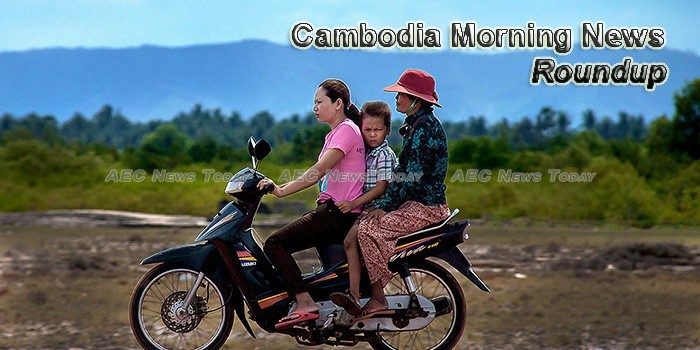 Keep an eye on protectionism: Hun Sen
Prime Minister Hun Sen yesterday warned about the impact to Cambodia of current protectionist trends in world trade and asked government officials to come up with strategies that will ensure the sustained growth of the local economy in the face of external risks.
— Khmer times

Election Will Be Held as Scheduled, Says PM Hun Sen
Speaking at a graduation ceremony of Royal University of Law and Economics on Tuesday morning, Prime Minister Hun Sen stated that the National Assembly 6th mandate election will be held on July 29, 2018 as scheduled.
— Fresh News

New travel app praised by tourism sector, ministry
The Kingdom’s software development sector is being seen as an increasingly important player in the country’s move to strengthen its tourism industry and provide visitors with the latest conveniences.
— The Phnom Penh Post

Cambodia’s Government to Speed Up Legal Provision for Cambodian Workers in Thailand
With the cooperation between Cambodia and Thailand in the fields of work and education, technical and vocational training, the two sides have assisted on legal provision to more than 300,000 Cambodian workers in Thailand, while more than 400,000 remains working illegally.
— Fresh News

Digitalisation must be a priority for businesses: ministry
The Ministry of Posts and Telecomm-unications yesterday urged government bodies and companies operating in Cambodia to redouble efforts to digitalise processes and embrace the latest technologies and trends in information and communication technology (ICT).
— Khmer Times

What’s Missing From Cambodia’s Democracy?
The problems are deeper than the lack of a viable opposition party.
— The Diplomat (paywall)

Japan provides support to Cambodian education
Japan is going to make aid of about USD 3 million to Cambodia to improve Cambodia’s education system. It is being done with a motive to ensure that students may get the chance to acquire scholarships to carry forward their studies in 2018.
— Devdiscourse

PM plans KR peace celebration
Prime Minister Hun Sen on Monday said that, with the 20th anniversary of the end of civil war with the Khmer Rouge being this year, the Kingdom will hold the biggest celebration yet in December to mark the end of the bloodshed.
— The Phnom Penh Post

Best tourism communities to be chosen in new contest
The Ministry of Tourism recently announced a new contest to find the best community-based tourism sites in the Kingdom and has called on villages and communities around the country to submit their application.
— Khmer Times

Factory workers to march to ministry after salaries unpaid
Aggrieved workers of First Gawon Apparel (Cambodia) plan to march to the offices of the Ministry of Labour and Vocational Training (MLVT) again on Tuesday, seeking a solution from the ministry in a salary dispute that has dragged on for more than five months.
— The Phnom Penh Post

Rangers find 109,217 snares in a single park in Cambodia
Snares – either metal or rope – are indiscriminately killing wildlife across Southeast Asia, from elephants to mouse deer. The problem has become so bad that scientists are referring to protected areas in the region as “empty forests.”
— The Guardian