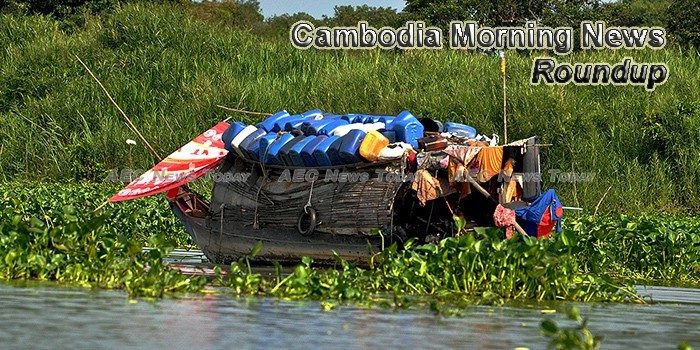 The Tax Man Cometh: Claims The Phnom Penh Post is Living on Borrowed Time (video)
Failing a massive cash injection in the next 60 days the future of Cambodia’s oldest English-language daily newspaper, The Phnom Penh Post, appears grim, with the 26-year-old tabloid set to become the latest victim of Cambodia’s rush to compliance and ramped up enforcement.
— AEC News Today (video)

Hun Sen promises more money for science research
While mentions of robots, nuclear reactors and artificial intelligence appeared in presentations during a technology conference in Phnom Penh on Thursday, speakers agreed that the Kingdom has been slow to adopt these technologies due to a lack of education.
— The Phnom Penh Post

Plans take root for cassava processor
A Chinese-based investment firm has announced plans to begin construction on the first of 10 cassava processing plants next month, with a total planned investment of $150 million, according to Agriculture Minister Veng Sokhon.
— The Phnom Penh Post

Cambodia PM Hun Sen Kicks Off Australia Trip as Protests Over Rights Record Loom
Cambodia’s Prime Minister Hun Sen kicked off a trip to Australia Thursday to attend a summit of the Association of Southeast Asian Nations (ASEAN) in Sydney, amid protests over his government’s crackdown on the opposition in the lead up to general elections in July.
— Radio Free Asia

Fortumo partners with Apigate to launch content services in Cambodia
Fortumo and Apigate, a subsidiary of Axiata Digital, have partnered to launch content services in Cambodia via Smart Axiata’s direct carrier billing API, according to a press release. This collaboration will enable Smart subscribers to purchase digital content and games in app stores and charge the transaction to their mobile phone bill.
— Mobile Payment Today

Australian among two killed in Cambodia landmine accident
An Australian and a Cambodian were killed and a second Australian injured when a landmine was accidentally detonated during a military training exercise west of Phnom Penh, police say.
— The Guardian