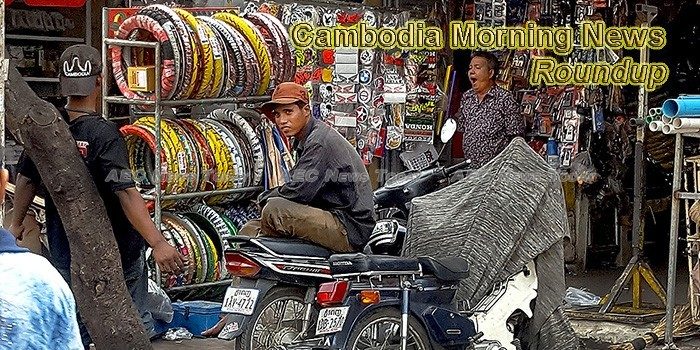 Cambodia Moves to Stabilise Cryptocurrency Market… With Ban
Cambodia regulatory authorities earlier this week issued a statement banning the trade and use of cryptocurrencies in the kingdom… while it writes the rules for their use.
— AEC News Today

Commercial market in Kandal raises hopes for trade with China
Commerce Minister Pan Sorasak has high hopes for the new China Commercial Market, saying on Thursday that it would help the Kingdom’s businesses export more to the regional powerhouse.
— The Phnom Penh Post

Achieving universal electricity access in Cambodia
One of the main goals of the ASEAN Plan of Action for Energy Cooperation 2016-2025 is ensuring that the citizens of ASEAN have accessibility to electricity.
— The Asean Post

The curious case of North Korea in Cambodia
On a quiet midweek evening on the streets of the Cambodian capital, the Pyongyang Restaurant is at near capacity.
— Channel NewsAsia

New partnership to build Cambodia’s biggest data centre
A new joint venture of local and international companies will result in the creation of the biggest data centre in the country, boosting the Kingdom’s capabilities to provide digital and cloud services.
— Khmer Times

Powerful, cheap and Cambodian: Computer dreams being born in the kingdom
When Thul Rithy first moved to Phnom Penh as a young man he lived in a simple pagoda with monks and exercised his keen thirst for knowledge.
— Channel NewsAsia

Rural lenders lose licences from NBC
The National Bank of Cambodia (NBC) has rejected the registration requests of 12 rural private lenders and revoked the licences of 11 others, according to a statement on Wednesday.
— The Phnom Penh Post

PM Hun Sen Is Proud of Cambodian Companies Invest in Local (Video inside)
Cambodian Prime Minister Hun Sen expressed his pride over Cambodian companies that have invested in the kingdom, not abroad, speaking at the inauguration ceremony of opening Safari World Phnom Penh by L.Y.P Group on Saturday.
— Fresh News (video)

Leisure hub opens in capital
Eden Garden, the latest entertainment hub in the capital, was officially launched on Thursday on the same site where thousands of villagers were evicted over a decade ago.
— The Phnom Penh Post

Twenty Houses razed in a fire
Twenty houses were destroyed in a fire which broke out in Phnom Penh’s Meanchey early morning while its cause has not yet known.
— Khmer Times

PM Hun Sen Calls on Political Parties Not to Curse Others
Cambodian Prime Minister Hun Sen wrote on Facebook on Sunday calling on all political parties and candidates to avoid cursing and using sarcasm towards one another as the campaign approached.
— Fresh News

Public advised against using fake health supplements
The public has been advised to avoid consuming Madura health supplements, including its coffee, weight loss medicine Caroline and joint medicine Osto as some of these products have failed to pass quality checks and some are counterfeits that can cause ill effects leading to possible death.
— Khmer Times