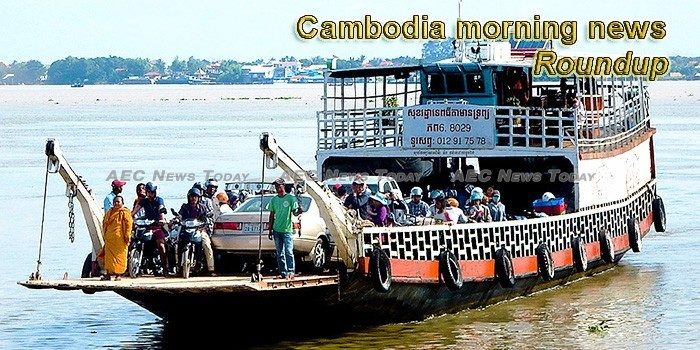 Ricketson trial to conclude today
Phnom Penh Municipal Court is today set to wrap up the espionage trial of Australian filmmaker James Ricketson, who has been in jail since June 2017.
— Khmer Times

Direct Flights from Beijing to Phnom Penh to Launch on First of November
General Mao Havannal, Secretary of State of the State Secretariat of Civil Aviation on Tuesday received a courtesy call of delegation of airline of the People’s Republic of China (Air China).
— Fresh News

UXO kills boy, injures three in Kampong Speu
A boy was killed and another three injured after an unexploded ordnance (UXO) they were playing with detonated in Kampong Speu province’s Ka Ek Porng village on Monday.
— Phnom Penh Post

Cambodia genocide survivor makes ‘homecoming’ to PH
When Youk Chhang first set foot in the Philippines in 1986, he said it felt like he was making his first steps to “heaven.”
— Philippine Daily Inquirer

Sushma Swaraj arrives in Cambodia
External Affairs Minister (EAM) Sushma Swaraj on Tuesday arrived in the Cambodian capital, as a part of her two-day trip to the South-East Asian nation.
— ANI News

King to preside over opening of parliament
The National Assembly issued a statement on Monday saying King Norodom Sihamoni will preside over its opening session on September 5, with the presence of dignitaries, ambassadors and representatives of civil society organisations.
— Khmer Times

Chinese delegation scopes out Kingdom
A group of Chinese entrepreneurs are on a four-day visit to the Kingdom to explore investment opportunities to expand their presence in the country.
— Phnom Penh Post

The making of new Chinese colonies
Sihanoukville used to be a sleepy coastal town in south Cambodia. Its beaches were known for their quiet, cosy – albeit a little seedy – atmosphere that attracted mostly families, individual travellers, and backpackers.
— The ASEAN Post

40 Cambodians To Attend Mine Clearance Training in China
Forty (40) Cambodians, both soldiers and civilians, will depart on Sept. 1 to join a mine clearance training in the People’s Republic of China under the support of the Chinese People’s Liberation Army.
— Agence Kampuchea Presse

E-commerce Site For Local Goods In The Making
The Royal Academy of Cambodia (RAC) is partnering up with e-commerce experts from Yunnan, in Southern China, to enhance online sales of Cambodian agricultural products.
— B2B Cambodia