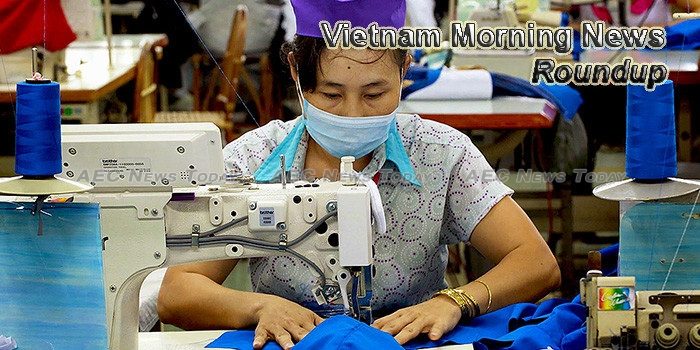 Vietnam’s Central Bank Says It’s Able to Keep Currency Stable
Vietnam’s central bank said record-high foreign reserves will enable it to keep the currency stable for the rest of the year as the government focuses on boosting growth in the Southeast Asian economy.
— Bloomberg

Vietnam is among best-growing stock markets
The continued increase of the VN Index (which has exceeded the 800 point threshold), the continued purchase of foreign investors and the accelerated state’s disinvestment from big corporations will create sustained growth in the market, according to Pham Luu Hung from the Saigon Securities Incorporated (SSI).
— VietnamNet Bridge

Crab farming in Vietnam’s southern tip
Viet Nam’s southernmost tip Năm Căn District in Cà Mau Province has earned a reputation as home to some of the finest female crabs in the country. The district’s crab farms are not only the go-to place for crab farmers in the Mekong Delta but also farmers nationwide.
— VietnamNet Bridge

Samsung aims to increase VN vendors to 50 by 2020
In June, Samsung held a Sourcing Fair at Samsung’s plant in the northern province of Bac Ninh.
— VietnamNet Bridge

Ben Thanh Market – a Saigon shopping heaven where haggling rules
Ben Thanh Market is undoubtedly the most famous market in Ho Chi Minh City, especially for foreign tourists who quickly realize that never-ending haggling makes the venue a no-go for the faint of heart.
— Tuoi Tre

A market for broken heart mementos
While many people keep old flames burning in their hearts while nursing scarred souls, there are others stuck with physical objects – jewelry, books, clothes or other souvenirs – painful reminders that they’d rather not have around. Now there’s a place to get these vestiges out of one’s life forever. An Vũ reports.
— Viet Nam News

VN exports rise nearly 20% in first 9 months
VIETNAM’S total import-export turnover in the first nine months of the year reached more than US$308.3 billion (Bt10.22 trillion), posting a 21.3 per cent year-on-year increase, according to the nation’s General Department of Customs.
— The Nation

Vietnam, US seek stronger financial cooperation
Vietnam expects the US to accelerate the ratification of an agreement on double taxation avoidance and facilitate negotiations for a governmental agreement on cooperation and assistance between customs agencies, said a high-ranking official.
— VietnamPlus

As quick as they can
The rise of e-commerce has been accompanied by increasing numbers of rapid delivery providers.
— Vietnam Economic Times

Fueling concern
After delaying previous deadlines, the Ministry of Industry and Trade (MoIT) has decided to replace sales of RON92 gasoline with E5 biofuel from January 1, 2018. “This represents an attempt by the government to ‘kill two birds with one stone’, protecting the environment and saving two ethanol plants – Binh Phuoc and Dung Quat,” said Mr. Phan The Rue, Chairman of the Vietnam Petroleum Association (VPA).
— Vietnam Economic Times

ICAV – friendship bridge between Argentina and Vietnam
NDO/VNA – The Argentina-Vietnam Culture Institute (ICAV) has well performed its role as a bridge for the friendship between the two countries since it was established 20 years ago.
— Nhan Dan Online