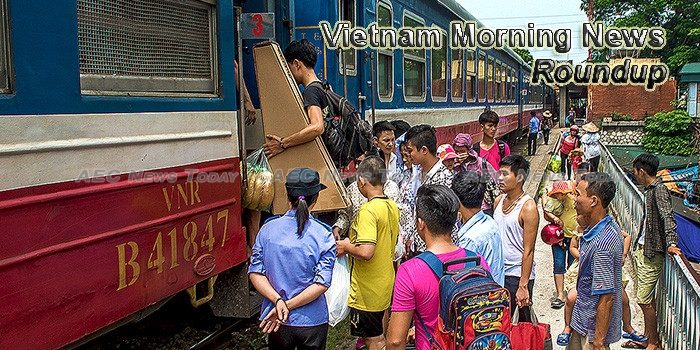 Short supply of Euro 4 fuel exacerbates pollution in Vietnam
While most cars in Vietnam are running on Euro 2 standard fuel, a new law effective January 1 mandates that all new automobiles in Vietnam, both imported and domestically assembled, must use petrol meeting the Euro 4 standard.
— Tuoi Tre News

Vietnam targets 16 bankers in latest crackdown
Vietnam issued arrest warrants for 14 bankers and took two more into custody on Tuesday after accusing them of causing losses totalling hundreds of millions of dollars in the scandal-tainted sector.
— Geo News

Vietnam’s retail sales jump to $74bln in first 7 months
Vietnam’s retail sales rose 10 percent to around $74 billion in the first seven months of this year, latest data from the General Statistics Office (GSO) showed, of which sales of foods and foodstuffs witnessed the strongest growth, followed by clothing and footwear, and household appliances.
— VnExpress

FPG still seeking new partners in Vietnam steel plant project
Formosa Plastics Group, one of the leading conglomerates in Taiwan, said Tuesday that it is still in the process of finding partners to jointly invest in the improvement and expansion of its steel plant in Vietnam, which reopened earlier this year after months of inactivity due to a toxic waste spill in 2016.
— Focus Taiwan

Vietnam gives power monopoly the power to hike prices
Depending on cost changes, EVN will be allowed to raise prices by up to 10 percent every six months without seeking gov’t approval.
— VnExpress

Smart technology in the spotlight in Hanoi
Vietnam has a solid foundation for information technology but must constantly strive to be globally competitive, Hajime Hotta, co-founder of Innovatube and president of Cinnamon AI Labs, said at the Hanoi technology event at the weekned.
— VietnamPlus

Investment flow into Phu Quoc Island remains strong
Apart from these nine projects, which cover 64.38 hectares in the island district, the board proposed the provincial government of Kien Giang to give approval in principle to 16 other projects which need 476 hectares of land.
— VietnamNet Bridge

Quang Tri province attracts more than 300 projects to local industrial parks
The central province of Quang Tri has to date licensed 316 projects in its industrial parks and economic zones with a capital totalling nearly VND68.5 trillion (US$3 billion).
— Nhan Dan

Philippines morning news for May 29