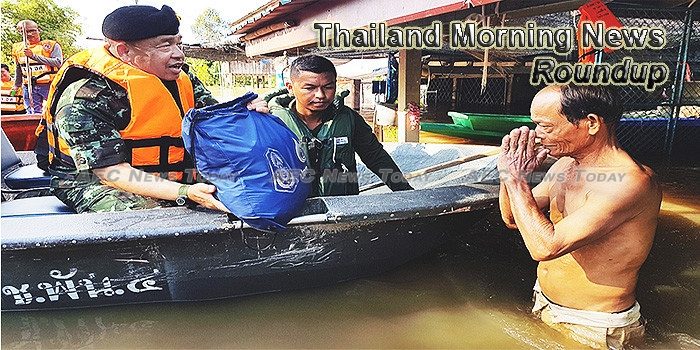 Chumphon placed under heavy rain, flashflood warning
The Centre for Flooding, Storm and Landslide Monitoring in Chumphon warned people of heavy rain and possible flash flood and surface flooding in the province from tomorrow (Oct 29) until Nov 2.
— Thai PBS

Thai king’s remains laid to rest at end of five-day ceremony
The bones and ashes of Thailand’s late King Bhumibol Adulyadej were brought to their final resting places on Sunday, the fifth and last day of an elaborate funeral ceremony that drew hundreds of thousands of mourners to the streets of Bangkok.
— Reuters

Can Trump reverse Thailand’s drift towards China?
Under the doctrine of “America First,” the Thai military regime has enjoyed warming relations with the United States. However, economic and development opportunities with China have pulled Thailand into China’s orbit.
— Global Risk Insights

Met Dept warns 10 provinces to brace for downpour
The Meteorological Department on Sunday warned residents in 10 provinces of the lower Central Plains and the South to brace for heavy downpours and strong winds over coming days.
— Bangkok Post

Thai Real Estate: Popular But Overvalued
Foreign investors choose Thai real estate more than anywhere else in Asia. That’s likely because of a strong tourism sector with Bangkok as the most visited city on the planet. People often come to Thailand, enjoy themselves, and buy property there.
— InvestAsia

Honda hopes to build PCX Electric bike in Thailand
AP Honda has sought cooperation with Thai authorities in a move to market the PCX Electric, Honda Motor’s latest electrically powered motorcycle, in the Kingdom and is set to announce updates this January.
— The Nation