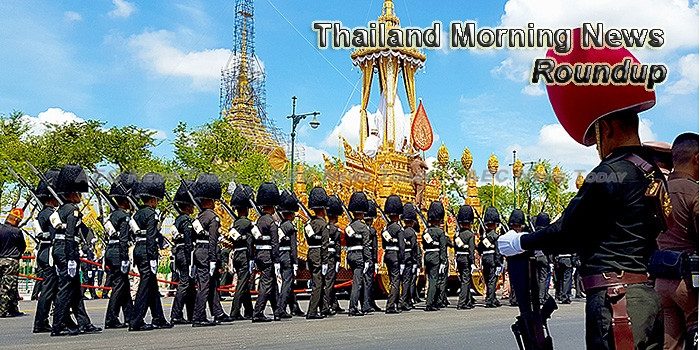 BOI to revise EEC incentives to encourage more investment
The Board of Investment (BOI) is now in the process of revising its investment incentives for the Eastern Economic Corridor (EEC), as the country continues to see recovery in trade and investment
— NBT World (video)

Sukhothai on edge as water breaches bank
Residents in Sukhothai’s Si Satchanalai district are encountering a threat of severe flooding after a massive amount of water burst out of an earthen crest of the Mae Tha Phae reservoir.
— Bangkok Post

Victims of floods can sue, say academics
AUTHORITIES ARE violating their own rules and could be sued for not maintaining irrigation facilities properly and failing to implement a disaster-prevention plan and warning system, academics said.
— The Nation

Salary deductions to begin for student loans
Officials of the Student Loan Fund (SLF) will between November and January show 1,000 employers across the country how to deduct payments for their employees’ school loans.
— The Nation

ING optimistic on cross-border activity
Low cost of funds, favourable demographics and growing consumption trends across the region are factors that will continue to boost cross-border mergers and acquisitions (M&A) activity in the region, says Michael Niederberger, head of corporate finance and M&A for ING in Asia.
— Bangkok Post

Police charge drone pilot for photographing Air Force airport
A shopping mall’s mechanic accused of flying a drone in the vicinity of the Air Force airport in Bangkok’s Don Muang district and publishing the footage on social media, claimed he merely wanted to record the view – not the airport.
— The Nation

Thailand’s Buddhist monks order reforms ahead of royal transition
Under growing pressure from Thailand’s military government, and their own religious bodies, Buddhist monks have launched a fresh round of reforms in recent weeks to clean up temples and overhaul a religion stalked by scandal.
— Channel NewsAsia / Reuters

Police heighten security for flood affected people
Deputy Commissioner-General of the Royal Thai Police Pol.Gen.Sriwarah Rangsipramkul has visited the flood-affected people in Ayutthaya province and instructed the local police officers to provide assistance for all of them.
— NBT World (video)

Phuket land owners’ refusal to sell stalls U-Turn flyover projects
The construction of two U-turn flyovers on Highway 402 (Thepkrasattri Rd) have halted due to the refusal of land owners to sell 10 meters of land on either side of the road required for the projects.
— The Phuket News

King maps out funeral etiquette
His Majesty the King has advised volunteers to be polite and exercise restraint in dealing with people who will participate in the royal cremation ceremony next week, government spokesman Sansern Kaewkamnerd said.
— Bangkok Post

Statues of deities at Wat Khao Daeng destroyed
The destruction of statues of various deities has continued at Wat Khao Daeng temple in Muang district of Nakhon Nayok province after a group of people have exploited the people’s belief in sacred objects for personal gains.
— Thai PBS