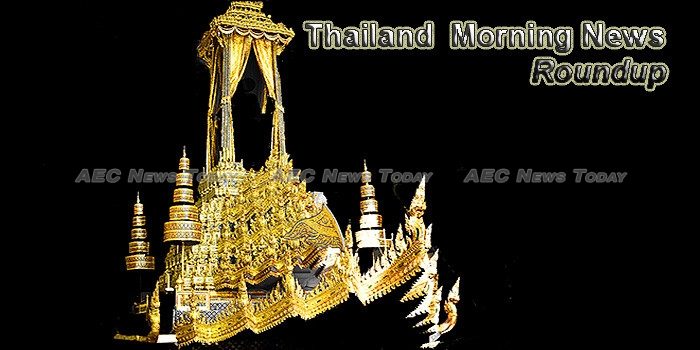 Thai junta sets firm date for election after many false starts
Thailand will hold a general election in November 2018, Prime Minister Prayuth Chan-ocha said on Tuesday, the most precise date he has given yet for the vote since taking power in a 2014 military coup.
— Reuters

Floods likely in provinces but not Bangkok
The government on Tuesday increased discharges from dams in the Central Plains and the Northeast and warned people in low-lying areas in the regions of upcoming floods while Bangkok remained safe despite concerns.
— Bangkok Post

Govt faces more EEC challenges than was thought, forum hears
SOME large infrastructure projects in the Eastern Economic Corridor are opposed by local communities, while a number have high costs and may not be able to proceed at the desired pace, researchers at the Thailand Development Research Institute (TDRI) have warned.
— The Nation

Director General of Thai Customs Orders Tax Collectors to Declare Assets to Finance Ministry
Director-General Kulit Sombatsiri of the Thai Customs Department is requiring senior officials responsible for tax collection to declare their assets to the Finance Ministry in a bid to increase transparency.
— ChiangRai Times

First batch of 28 China-made tanks rolls in
The first batch of 28 VT4 tanks bought for 4.9 billion baht from China has arrived in Thailand, according to the army.
— Bangkok Post

KTC chief forecasts tough 2018
Krungthai Card expects earnings to splutter next year as the Bank of Thailand’s tougher regulations on credit cards and personal loans, particularly the reduction of the ceiling interest rates for credit cards to 18% from 20%, take a bite out of KTC’s income.
— Bangkok Post

PM orders preparations to cope with anticipated storm during Oct 12-14
Prime Minister Prayut Chan-o-cha has instructed authorities concerned to brace for possible flooding in the Chao Phraya river basin during October 12-14 when heavy rain induced by an anticipated storm is to lash the upper region of the country, said government spokesman Lt-Gen Sansern Kaewkamnerd on Tuesday.
— Thai PBS

RID head inspects water management in preparation for new deluge
The Director-General of the Royal Irrigation Department (RID) has led a team to inspect the situation at the Chao Phraya Dam in Chai Nat province.
— NNT

Gov Spokesman says water management effective
The Thai Government’s spokesman, Lt Gen Sansern Kaewkamnerd says that the government has been effective in its management of water in the recent period of harsh weather, with floods not impacting any economic zones and monkey cheek retention areas used to handle excess inundation.
— NNT

No ifs, no butts – smoking ban for 20 popular beaches
THE MARINE and Coastal Resources Department plans to ban smoking on beaches around the country next month after thousands of cigarette butts were found in the sand.
— The Nation

Implications and significance of ICAO’s decision to remove red flag from Thailand
To find out more about the ICAO’s lifting of the “red flag”, we are joined by Minister of Transport, ArkhomTermpittayapaisith who tells us about implications of this development. Let’s take a look.
— NBT World (video)

Digitalisation to secure rice farming
WITH the rise in smartphone usage in Thailand, Bayer’s country group head Simon-Thorsten Wiebusch said the next step to improve local rice crops may come from “digitalization” .
— The Nation

First batch of Chinese engineers qualified to work on high speed rail in Thailand
The first 77 engineers in China have passed the Thai Council of Engineers’training and assessment prior to their involvement in the high-speed railway project in Thailand.
— NBT World (video)

PM Prayut raising awareness of waste disposal
According to the World Travel and Tourism Council or WTCC, the world’s tourism landscape will be changed by 2020 when more than 1.6 billion people will travel. Of that total, 416 million tourists will travel to the Asia-Pacific region, where Thailand is a key player. Meanwhile, the Tourism Authority of Thailand has aligned its marketing activity plan this year, with the country’s ‘Industry 4.0’ strategy that calls for a migration to high-tech and high-value service industries over the next 20 years.
— NBT World (video)