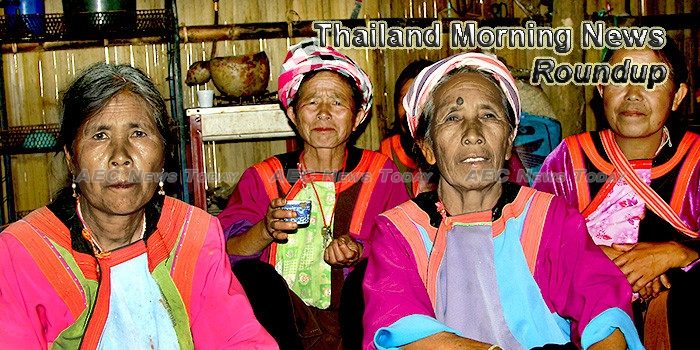 FOMM to make EVs in new Thai plant
Japan’s FOMM Corporation is scheduled to start the construction of its assembly plant for its compact electric vehicles (EVs) at Amata Nakorn Industrial Estate this year, with production expected to kick off by June next year.
– Bangkok Post

Three Years After Coup, Thailand Plagued by Lackluster Economy
Once prized in Southeast Asia for its economic strength, the new reality for Thailand three years after the military seized power is growth that’s lagging behind peers.
– Bloomberg

Authorities warned organizers of May 22 coup anniversary
Police and military officers have seized several documents deemed hostile to the National Council for Peace and Order from the organizers of a forum to mark the 3rd anniversary of the May 22 coup held at Thammasat University on Sunday.
– Thai PBS

Property sector hit by banks’ caution on mortgages
COMMERCIAL BANKS continue to be cautious in advancing housing loans as they have concerns about the repaying ability of customers, and this is reflected in the fact that loan rejection is up to 40 per cent in the first four months of this year, property experts said.
– The Nation

Country has become too militarised, analysts say
THREE YEARS ago today, the coup took place with the military claiming it had to divert the country from the brink of collapse, as political conflict had divided Thai people and there was no light at the end of the tunnel – just deadlock.
– The Nation

Surrogacy group caught
A CROSS-BORDER network that uses Thai women as illegal surrogate mothers-for-hire has been exposed after the arrest of seven suspects on the weekend in Nong Khai.
– The Nation

Ragged pursuit of growth
The military government has made strides in developing infrastructure, setting up the national e-payment scheme and reforming taxes but it is still struggling on some other fronts.
– Bangkok Post

PTTEP pushing to close M&A deal by year’s end
PTT EXPLORATION and Production (PTTEP) has been striving to conclude a merger and acquisition deal by the third or fourth quarter this year, the company’s president and chief executive officer Somporn Vongvuthipornchai has said.
– The Nation

High demand for rice sends prices soaring
Rice exporters are saying the crop’s price drop has ended and believe high demand and releases from state stocks will send values climbing by up to 20 percent.
– NNT

Three years of wasted opportunity for tax reform
“REFORM before election” has been the theme of the coup d’etat led by General Prayut Chan-o-cha who promised sweeping economic and political reforms. Needless to say over the past three years, the government has mishandled economic reforms, in particular tax reforms.
– The Nation

Extra tax perks mulled for having more kids
The Finance Ministry is considering additional tax incentives to encourage people to have more children as Thailand becomes an ageing society, according to a source familiar with the matter.
– Bangkok Post

PM: Government’s development measures intangible, yet sustainable
The Prime Minister has reiterated that the government’s solutions to longstanding problems in Thailand are based on sustainability and effectiveness.
– NBT World (VDO)

DSI sweeps across luxury car show rooms in search of tax evasion
The Department of Special Investigation (DSI) has carried out a sweep in Bangkok and its vicinities looking for tax evading luxury vehicles.
– Pattaya Mail

Foreign orders boost rice
Millers and exporters are more upbeat about rice prices and shipment prospects after the surge in foreign rice purchase orders in the past couple of weeks.
– Bangkok Post

Three cops under probe for allowing two arrested suspects to escape
Three non-commissioned police officers of Pone Thong district police were placed under investigation for allowing a visit of two suspects in detention cell by a girlfriend and enabling them to escape.
– Thai PBS

Thailand is world’s deadliest country for motorcyclists
A father gives his young son a new motorcycle for his birthday. “Study well. Don’t hit anyone,” he says. The boy gets on the motorcycle and rides out of the gate, whereupon another rider crashes into him.
– The Star Online

New System for Thai Taxi
Safety and quality of service for all taxi passengers are projected to further improve, through the installation of new equipment, Panod Srisinsuphya has more.
– NBT World (VDO)