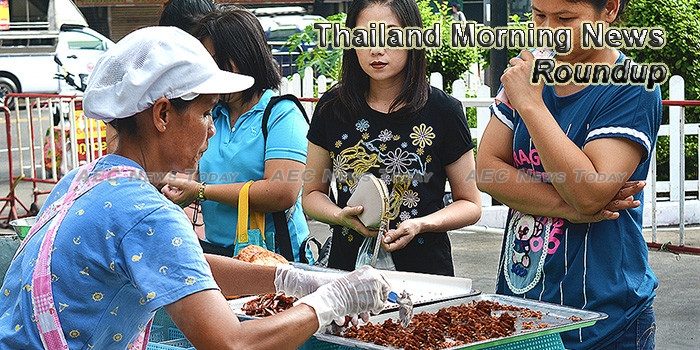 Telecoms, media see profits slide
LISTED telecom, media and entertainment firms reported a drop in first-quarter net profit even though some of them recorded revenue growth, as their costs rose from both network installation and higher licence fees.
– The Nation

Supachai sees property bubble ahead
Domestic private investment remains low, with most of it concentrated in the property sector, which could cause a bubble, says Supachai Panitchpakdi, a former director-general of the World Trade Organization and secretary-general of the UN Conference on Trade and Development.
– Bangkok Post

Central bank and 16 banks join hands to address household debts
The Bank of Thailand, in cooperation with 16 commercial banks, the Thai Bankers Association and Sukhumvit Asset Management Company, have signed an agreement of cooperation to help solve household debts of individuals who do not have guarantee.
– Thai PBS

PM upset with nurses’ objection to government’s employment plan
Prime Minister Prayut Chan-ocha hit back at the Federation of Nursing Profession and some nurses for rejecting the government’s plan to upgrade the status of nurses to that of civil servants within three years.
– Thai PBS

BOT links with commercial banks and asset manager to set up debt-solving clinics
THE BANK of Thailand has joined forces with 16 commercial banks and Sukhumvit Asset Management Co (SAM) to set up clinics to clear up non-collateral debt problems with several creditors amid high levels of household debt.
– The Nation

Grass-roots efforts help clean up trash-filled Thai beaches
Even the remotest depths of the world’s oceans are not immune to plastic pollution. Research recently published in the journal Nature Ecology and Evolution revealed alarming levels of toxins in crustaceans living in the Marianas Trench, the deepest known ocean trench.
– Nikkei Asian Review

Minor developing 3 Phuket projects
MINOR International (MINT), a hotel and restaurant operator listed on the Stock Exchange of Thailand, expects consolidated annual core revenue growth of between 15 and 20 per cent this year, its founder and chairman William Heinecke has said.
– The Nation