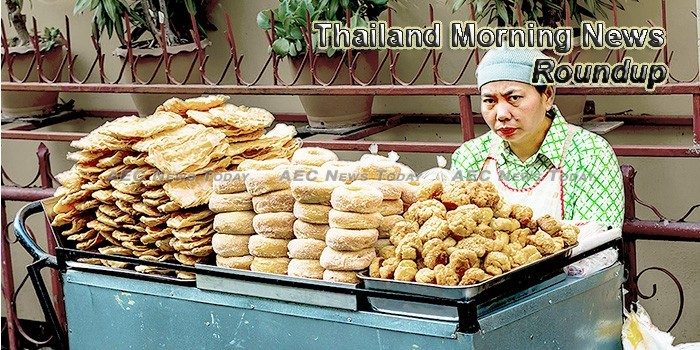 After delays, ground broken for Thailand-China railway project
Construction of a long-awaited Thai-Chinese railway line that will link Thailand, Laos and China officially began on Thursday with a ground-breaking ceremony in the northeastern Thai province of Nakhon Ratchasima.
— Reuters

Japanese flag interest in EEC
THAILAND has discussed with Japanese MPs and business people the possibility of a forum for the exchange of political ideas, Deputy Prime Minister Somkid Jatusripitak said yesterday.
— The Nation

Exports hit 58-month high as nation rides the global economic recovery
THAI EXPORTS soared to their highest in 58 months in November while exports in the first 11 months of the year hit a six-year high, the Commerce Ministry revealed yesterday.
— The Nation

Transport Ministry orders purchase of extra trains for Airport Link
The operator of the Airport Rail Link has been assigned by the Ministry of Transport to procure additional trains in response to the rising number of passengers.
— News Today (video)

NLA at odds on snooping plan
The National Legislative Assembly (NLA) could not agree Thursday on whether to allow the National Anti-Corruption Commission (NACC) to conduct eavesdropping and wire-tapping during investigations.
— Bangkok Post

Labourers call for 360THB minimum wage nationwide
Due to skyrocketing costs of living, a nationwide network of Thai labourers has urged the Labour Ministry to increase the national minimum wage to 360 baht per day. The rate has remained almost unchanged for five years.
— Prachatai English

DSI and NOB officials raid Wat Dhammakaya to look for Dhammajayo
Officials from the Department of Special Investigation and the National Office of Buddhism conducted a night raid of Wat Dhammakaya Wednesday night (Dec 20) to look for Phra Dhammajayo, the former temple abbot, who has not been seen in public for several months now.
— Thai PBS