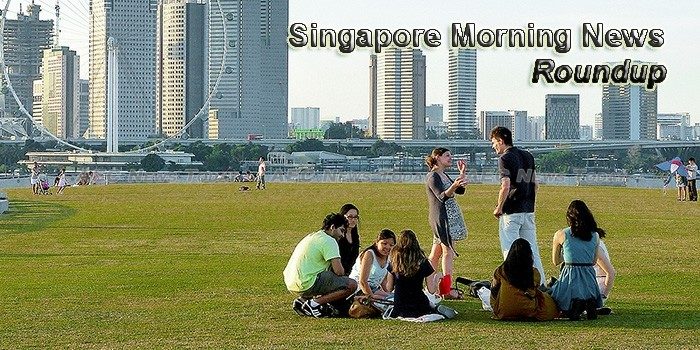 Singapore office rents under pressure
Office rents in Singapore’s central business district eased 1.2 per cent to S$8.90 (Bt220) per square foot a month in the first quarter of this year, while retail rents show signs of stabilising despite challenges, a property consultancy says.
– The Nation

MOUs for financial collaboration
NINE MEMORANDA of understanding were signed on Tuesday by Singapore and Shanghai financial institutions to deepen cooperation.
– The Nation

Singapore stocks close week lower as geopolitical uncertainty rises
LOCAL stocks spent the week tracking swings in the Dow futures and on Wall Street, which in turn were dictated by geopolitical risk concerns. The main source of this risk was developments first in Syria where the US launched missile attacks, then the Korean peninsula, where tensions are running high after the US despatched aircraft carriers there this week in an apparent show of force to Pyongyang after the latter’s explicit statements about nuclear weapons and the likelihood of using them.
— The Business Times

Singapore readies itself for truck-to-ship LNG bunkering
SINGAPORE took another step to ready its infrastructure for the supply of liquefied natural gas (LNG) as marine fuel with the launch on Wednesday of its first truck-to-ship LNG loading facility at Singapore LNG Corporation’s (SLNG) terminal.
— The Business Times

NUS researchers invent way to ‘teleport’ drinks over the Internet
While the act of physical teleportation remains in the realms of sci-fi, National University of Singapore (NUS) researchers have now developed a way to transmit a drink over the Internet — or at least replicate the taste of a particular drink from anywhere, at any moment on the planet.
— Today Online

New office to help get Singapore ready for digital society
The digital readiness programme office is just one of the initiatives revealed during the Ministry of Communications and Information’s workplan seminar for the year.
— Channel NewsAsia

Prisons tap technology for tailored rehab efforts
Prison officers will increasingly be less occupied with watching over their charges and focus instead on “higher-order” work, geared towards rehabilitating prisoners, as the Singapore Prison Service (SPS) taps technology to automate processes.
— Today Online

Star Wars fest to kick off Disney partnership with STB
A Star Wars festival to be held at Gardens by the Bay next month will kick off a three-year partnership between the Singapore Tourism Board (STB) and The Walt Disney Company South- east Asia to bring themed events and activities here.
— The Straits Times

Ahead of 2G shutdown, most users ready for 3G
Around two-thirds of those who use Singapore’s 2G mobile network have switched to 3G, the Migrant Workers’ Centre (MWC) said yesterday, just days before the gradual shutdown of the 2G network is completed next Tuesday.
— The Straits Times

Beware of calls from ‘+65 6391 6100’ impersonating immigration officers
Received a call from “+65 6391 6100” recently with the caller purporting to be from the Immigration and Checkpoints Authority (ICA)?
— Today Online

Singapore Morning News For May 21