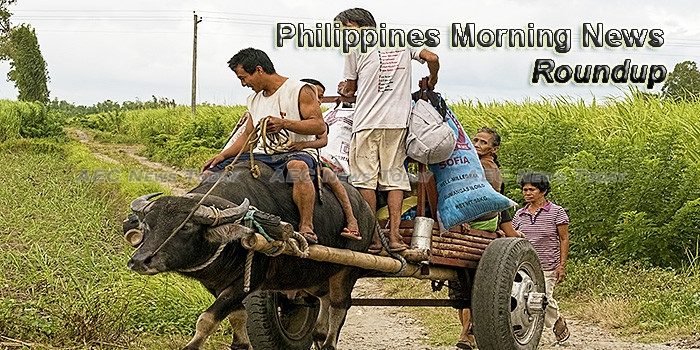 DoF seeks to generate P47B from sugar tax
THE Department of Finance (DoF) said higher excise tax on sugar sweetened beverages can generate an additional P47 billion in revenue in the first year of implementation.
— The Manila Times

San Miguel nets P13.8 billion in 1st quarter
EARNINGS of San Miguel Corp. (SMC) inched up at the start of the year on the strength of its food, beverage, oil and infrastructure businesses, but growth would have been faster without the impact of the peso’s fluctuation.
— BusinessWorld Online

US, UK issue travel warning on Palawan
“Shoot on sight” is how President Duterte wants the military to deal with Abu Sayyaf bandits, as the United States and Britain have alerted their citizens to threats of kidnapping of foreigners by the terror group in some resorts in Palawan.
— The Philippine Star

Duterte in Cambodia for infrastructure push
President Rodrigo Duterte arrived Wednesday in this Cambodian capital where he will make a pitch for his ambitious socioeconomic blueprint before top business and political leaders in the region.
— ABS-CBN

Philippines: Coconut farmers get help in crop care through their phones
GENEROSA GONATO’S mobile phone beeped with a warning for the coconut farmer in the southern Philippines to be vigilant against bud rot, a common disease fatal for coconut trees. The message included the symptoms and how to treat it.
– Tech Wire Asia

DOJ probes Janet’s VIP treatment in surrender
As it sets a reinvestigation on the Priority Development Assistance Fund (PDAF) scam with Janet Lim-Napoles as a possible state witness, a puzzled Department of Justice (DOJ) hopes to figure out why the businesswoman went straight to Malacañang upon surrendering at the peak of the controversy in the previous administration.
— The Philippine Star

Capitol loses P800,000 to fake quarry coupons
THE Negros Occidental Provincial Government lost about P800,000 in revenues after a quarry operator from the south allegedly used fake coupons to carry out his business.
— Sun Star

FDI inflows up 11% in 2 months
Foreign direct investment (FDI) inflows recorded a double-digit growth of 11 percent in the first two months on the back of sustained growth in the economy, the Bangko Sentral ng Pilipinas (BSP) reported yesterday.
— The Philippine Star

Shares open higher on upbeat GDP growth prospects
Share prices opened higher on Thursday ahead of the release of the report on the first quarter gross domestic product next week.
— ABS-CBN

Factory output rides on sustained economic growth momentum
MANUFACTURING grew for the 21st straight month last March, with production at the country’s factories up by more than a tenth at the close of the first quarter.
— BusinessWorld Online

EU backs PH’s anti-drug program
The European Union (EU) is gearing up for rollout of a project designed to ensure that former drug addicts do not return to their old habit, as more countries continue to offer support for the Duterte administration’s aggressive war against illegal drugs.
— Manila Bulletin