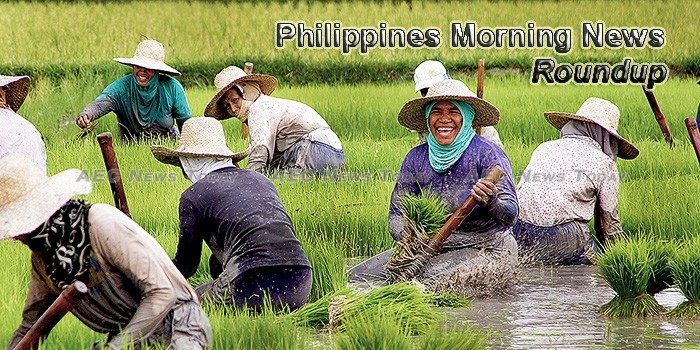 Palace order needed to put up tariff system for rice
Following the Duterte economic team’s decision to lift import curbs on milled rice come June 30, Malacañang is readying an executive order that will help the domestic rice market transition to a tariff system for inbound grains, according to an official of the National Economic and Development Authority.
— Inquirer.Net

Philippines’ Duterte threatens press over critical coverage
Philippine President Rodrigo Duterte on Thursday described two major media outlets as “sons of whores” and warned them of karmic repercussions for their critical coverage of his deadly drug war.
— Asia One

Phl lists 14 projects for Japan funding
Fourteen infrastructure projects have been lined up for possible Japanese financing, three of which – collectively valued at $8.82 billion – will be prioritized for funding and implementation in the near term, Socioeconomic Planning Secretary Ernesto Pernia said yesterday.
— Phil Star

Senators frown on Duterte pardon for 19 cops in mayor’s killing
Senators on Thursday frowned upon President Duterte’s insistence on granting absolute pardon to policemen charged with the murder of Albuera, Leyte, Mayor Rolando Espinosa Sr., saying it could give law enforcers the notion that they had blanket authority to kill drug suspects.
— Inquirer.Net

Duterte makes pitch for smoking ban
President Duterte on Wednesday vowed to implement a smoking ban in the country as he shared his health woes, including his need to use an oxygen machine because of his oxygenation problem from years of smoking.
— Inquirer.Net

Duterte impeachment ‘not hopeless,’ says Magdalo lawmaker
An impeachment complaint against President Rodrigo Duterte is not a hopeless case, even as his allies make up the majority in Congress, one of its proponents said Friday.
— ABS-CBN

Duterte assailed for ‘defeatist’ stand vs China
Magdalo Rep. Gary Alejano on Thursday filed supplementary charges to his impeachment complaint against President rodrigo Duterte, accusing him of taking a “defeatist stance” by doing nothing to challenge China’s activities on Benham Rise and in the West Philippine Sea.
— Inquirer.Net

Jails full of drug addicts, Ecija rehab center has few
The country’s largest drug rehabilitation center, envisioned to house up to 10,000 addicts, is treating only a few patients even as many city jails are bursting at the seams with the influx of at least 25,000 users amid the administration’s war on drugs.
— Inquirer.Net

Implement RH law, EU urges Phl
The European Union (EU) is calling for the full implementation of the Responsible Parenthood and Reproductive Health (RH) Act of 2012, which is only possible if the Supreme Court’s temporary restraining order (TRO) on the law is lifted.
— Phil Star

Tax reform in focus amid high PHL hopes
THE GOVERNMENT’S planned tax reforms have come into sharper focus after Fitch Ratings, Inc. on Wednesday tagged them as a linchpin in the Philippines’ bid to achieve faster, more inclusive growth in the next six years.
— Business World Online

Asian community rattled by Trump immigration policies
The debate surrounding US President Donald Trump’s immigration crackdown has focused almost entirely on the Latino community, leaving other groups affected – notably Asians – largely out of the discourse, according to experts.
— Manila Bulletin

Palace: Int’l court can’t interfere in PH affairs
Malacañang sees no reason for the International Criminal Court (ICC) to intervene in issues concerning the Philippines, particularly on the country’s fight against illegal drugs.
— The Manila Times

Fitch affirms PH investment grade
Debt watcher Fitch Ratings affirmed the Philippines’ “BBB-“ minimum investment grade rating, as well as its positive outlook, but warned it will be watching the impact of the government’s anti-illegal drugs program on the overall economy.
— The Manila Times