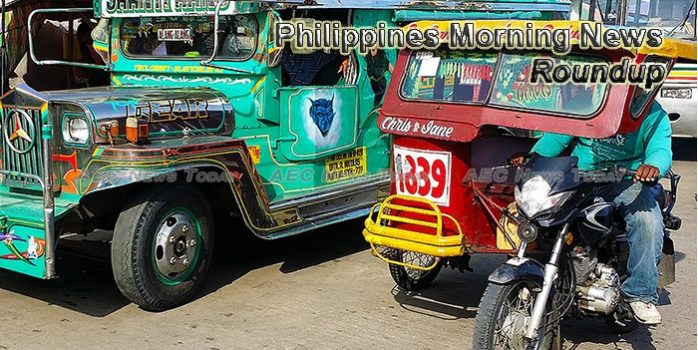 AIIB to approve $150M financing for MM flood project
CHINA-LED Asian Infrastructure Investment Bank (AIIB) may approve this week $150 million to finance a Philippine project to improve flood management in Metro Manila, according to the Department of Finance.
— The Manila Times

191 terrorists killed in 3 weeks of clashes
At least 191 terrorists have been killed since the battle for control of Marawi City erupted between government troops and the Maute Group nearly 3 weeks ago, the Armed Forces of the Philippines (AFP) said.
— The Manila Times

Cebu airport operator proposes P200-B expansion
The operator of the Mactan-Cebu International Airport (MCIA) has submitted a P200-billion unsolicited proposal for the construction of a second runway and expansion of the airport.
— The Philippine Star

Foreign buying seen steady despite Fed
THE PHILIPPINE stock market should remain resilient even if the United States Federal Reserve were to lift interest rates further this week, as widely expected, drawing strength from sustained foreign fund inflows on the House of Representatives’ approval of a tax reform package and economic growth prospects.
— BusinessWorld Online

Duterte gives P110,000 to each soldier wounded in Marawi
One by one in front of 80 wounded soldiers and a cop – most of them on wheelchairs – President Rodrigo Duterte raised his hand in salute.
— Rappler

Gov’t borrowings surge to P206 B
Government borrowings surged more than seven-fold in April from a year ago after the issuance of retail Treasury bonds (RTBs) during the month, data from the Bureau of the Treasury (BTr) showed.
— The Philippine Star

Philippines: Duterte focused on drugs, ignored rise of IS – analyst
PHILIPPINES President Rodrigo Duterte’s focus on the controversial war on drugs left the country exposed to the rising influence of Islamic State (IS) militants in the semi-autonomous southern provinces, says a security expert.
— Asian Correspondent

Duterte has ousted the Constitution to become a revolutionary President
ASSISTED by US Special Forces, the Philippine military and police forces are looking to finally “liberating” Marawi City in Lanao del Sur today, from the grip of the Maute terror group and its confederates, which have engaged the government in bloody clashes since May 23, 2017, prompting President Rodrigo Duterte to issue Proclamation 216, declaring martial law and suspending the privilege of the writ of habeas corpus in the whole of Mindanao.
— The Manila Times

Economy likely grew 7% in Q2 – Pernia
The economy likely grew close to seven percent in the second quarter due to the improving performance of the farm and exports sector, Socioeconomic Planning Secretary Ernesto Pernia said.
— The Philippine Star

Consumer spending growth to ease — BMI
GROWTH in consumer spending will likely ease over the next five years on the back of rising commodity prices and a weaker peso, analysts at BMI Research said, adding this could cause overall economic growth to slow in the same period.
— BusinessWorld Online

Philippines’ Duterte says didn’t seek U.S. support in city siege
President Rodrigo Duterte said on Sunday he did not seek support from Washington to end the siege of a southern Philippines town by Islamist militants, a day after the United States said it was providing assistance at the request of the government.
— CNBC

Civilians in Marawi to hoist PH flags indefiance of Maute
Wearing white T-shirts and carrying white flags, barangay officials will lead residents of some villages in Marawi City as they try to gain entry into their respective villages today, Independence Day, and hoist the Philippine Flag.
— Manila Bulletin

Signature drive for nat’l cancer program launched
With the number of cancer cases among adults and children increasing, the Cancer Coalition of the Philippines launches today “Kalayaan Mula sa Kanser,” a signature campaign asking Congress to enact a law on an integrated cancer control and prevention program
— Philippines Daily Inquirer