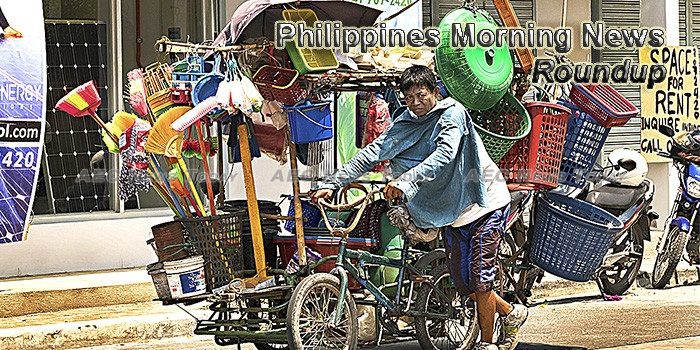 Duterte approves P3.767-T budget for 2018
President Rodrigo Duterte has approved the P3.767-trillion budget for 2018, as he prepared to implement a massive infrastructure overhaul, one of his economic managers said Tuesday.
— ABS-CBN

House bill wants ATM skimmers jailed for life, fined up to P5 million
A House bill seeks to penalize the skimming of at least 50 automated teller machine (ATM) cards with life imprisonment as well as a fine ranging from P1 million to P5 million.
— Rappler

Government readies Clark airport offer to investors
THE GOVERNMENT will offer to investors this month the P12.55-billion Clark International Airport Expansion Project that will test the waters for a “hybrid” financing scheme that will see a mix of official development assistance (ODA), state funding and public-private partnerships (PPP), the head of the Bases Conversion and Development Authority (BCDA) said yesterday.
— BusinessWorld Online

PH to outperform growth in Asean — BMI Research
The Philippines, together with Myanmar and Vietnam, are expected to post the fastest economic growth in Asean mainly on the back of rosy domestic prospects, the research arm of the Fitch Group said Tuesday.
— Philippine Daily Inquirer

PHL manufacturers most optimistic in Asean–report
The Philippine manufacturing sector posted the strongest growth in the region in June, despite a slight slowdown from the growth rate it recorded in May.
— Business Mirror

7 governors, 132 mayors in Mindanao lose power over police
Seven governors and 132 mayors from the island of Mindanao have been stripped of their powers over local police by the National Police Commission (Napolcom).
— Rappler

Philippines not married to US, can still pursue China, says Manila’s top diplomat
The Philippines’ new foreign secretary, Alan Peter Cayetano, warned that “outside influences” could turn Southeast Asia into “a theatre of geopolitical rivalry” and that Manila’s relations with the US should not stop it from forging ties with China.
— South China Morning Post

Philippine court upholds martial law as siege’s end seen
The Philippine Supreme Court upheld on Tuesday the president’s declaration of martial law in the south in a legal boost to a military offensive that the defense chief said may soon succeed in quelling an uprising by Islamic State group-linked militants.
— ABC News

US firms hold off investments in Philippines
The Philippine Economic Zone Authority (PEZA) said many American information technology and business process outsourcing (IT-BPO) companies continue to put their expansion plans in the country on hold as they wait for clearer policies from US President Donald Trump.
— The Philippine Star

P5k assistance earmarked for displaced residents returning to Marawi
At least 19,000 families in evacuation centers in Northern Mindanao and those seeking shelter elsewhere will each receive P5,000 once they return to Marawi City when the armed conflict ends.
— The Philippine Star

Ecozone investments soar 71% to P120.2 B
Investments registered at the Philippine Economic Zone Authority (PEZA) continue to pour in, surging 71 percent in the first half of the year on the back of sustained investor confidence in the current administration, the country’s ecozone regulator said.
— The Philippine Star

PSC earmarks P86.8M for SEAG
The Philippine Sports Commission yesterday allocated P86.8 million for the stint of more than 700 delegates in the Aug. 19-30 Southeast Asian Games in Kuala Lumpur, Malaysia.
— The Philippine Star

PITC maps out pharmazones
The Philippine International Trading Corp. (PITC), the trading arm of the Department of Trade and Industry (DTI), is putting up economic zones dedicated to pharmaceutical companies as it aims to make the Philippines a major manufacturing hub for medicine in the region.
— The Philippine Star

Gov’t troops retake Maute lair Dansalan College
Government forces inch closer toward liberating Marawi City as they gain control of Dansalan College, one of the strongholds of the Maute fighters when their attack began over a month ago.
— CNN Philippines

Germany offers aid in maritime, aviation, rail development
GERMANY has expressed interest in helping develop the Philippines’ maritime, rail and aviation sectors, yesterday kicking off by signing of a letter of intent to cooperate in the maritime industry to facilitate improved connectivity between the two countries.
— BusinessWorld Online

7 projects lined up for funding by Korea Eximbank
THE Department of Finance (DoF) said it has identified seven projects to be funded by the $1 billion concessional loan offered by South Korea last month, through its Economic Development Cooperation Fund.
— BusinessWorld Online

Subsidies on state-owned firms decline over 45% in May
SUBSIDIES provided to government-owned and -controlled corporations (GOCCs) fell over 45% in May, according to data from the Treasury bureau.
— BusinessWorld Online

Maute coerces hostages to become Muslims, commit lootings—task force
Hostages being held by the Maute group had been forced to “convert” to Islam in order to survive, the military said based on the testimonies of survivors who were either rescued by government forces or escaped captivity.
— Inquirer.net

EO cuts red tape in issuance of permits for power projects
Industry players will now only need 30 days—from the current 1,340 days—to secure the necessary permits and licenses to start a big-ticket power project, thanks to Executive Order (EO) 30 issued by President Duterte on June 30.
— Business Mirror

Bacolod crime incidents drop 30.55% in 1st half
BACOLOD City has lower crime volume in the first half of 2017 with a decrease of 30.55 percent compared to the incidents recorded during the same period last year, police records showed.
— Sun Star

ID cards proposed to stop terrorists
The Central Luzon police on Tuesday encouraged 200 Muslim leaders in the region to adopt an identification (ID) system similar to the one being enforced in Tarlac province’s Muslim communities to prevent the spread of terrorism and lawlessness.
— Philippine Daily Inquirer

Pacquiao seeks rematch
Brushing off calls for him to permanently retire from boxing, Manny Pacquiao has verbally committed himself into a rematch with Australian Jeff Horn.
— The Philippine Star