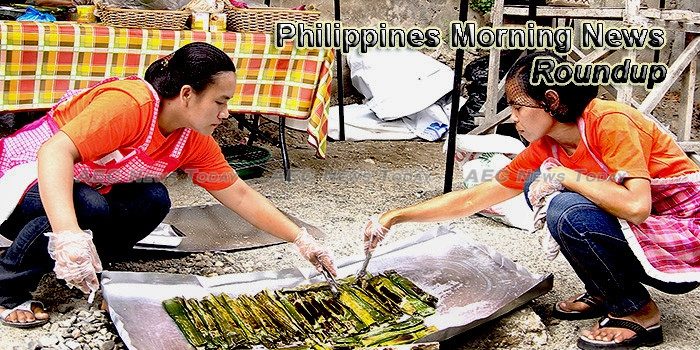 Bank loans up 19% to P6.43 T in June
Bank credit grew faster at 19 percent in end-June due to higher disbursements to the real estate and manufacturing sectors, the Bangko Sentral ng Pilipinas (BSP) reported yesterday.
— The Philippine Star

PH only producing 1% of local dairy demand
AN EXECUTIVE of the Mindanao Association of Dairy Industry Stakeholders (Madis) said they are targeting to increase the production of dairy products in the country in the next five years.
— Sun Star

Indonesia mulling move to send troops to besieged Philippines city
Indonesia is not dismissing the possibility of sending its troops to the besieged city of Marawi in the Philippines, a top security official has said, adding that the archipelago will continue to strengthen security cooperation with neighbouring countries.
— The Star Online

Cirtek targets $120-million revenues for this year
CIRTEK HOLDINGS Philippines Corp. expects to book $120 million to $125 million in revenues this year, driven by the additional capacity of its Laguna plant and contributions from newly acquired tech firm Quintel.
— BusinessWorld Online

P15-B T-bill issue awarded in full
The Bureau of the Treasury (BTr) made a full award of P15 billion in Treasury bills during yesterday’s auction amid robust market demand for government securities.
— The Philippine Star

Philippines Vows to Defend Its Outsourcing Empire
The Philippines’ $23 billion outsourcing empire is facing mounting risks: China is rising quickly as a competitor, the government wants to cut some incentives and a siege in the south of the country is worrying investors.
— Bloomberg

19,000 rabies cases in C. Visayas
Four persons died while 19,382 others were infected with rabies in Central Visayas in the first three months of the year, according to the Department of Health (DOH).
— Manila Bulletin

1,656 families still affected by ‘Gorio’
Despite the departure of “Gorio” from Philippine territory, inclement weather conditions, further worsened by the southeast monsoon, has affected an estimated 1,656 families or 7,339 persons in the National Capital Region, Regions 1 and 3, CALABARZON and the Cordillera Autonomous Region (CAR).
— Philippine News Agency

Govt budget deficit set to double to P147B in July
The Philippine government’s budget programmed for July is expected to end at a deficit of P147.73 billion, swelling from June and more than doubling the year-earlier shortfall, with expenditures set to far exceed revenues, the Department of Finance (DoF) said in a report on Monday.
— The Manila Online

Parojinog daughter asks Duterte to probe Ozamiz raids
Ozamiz City Vice Mayor Nova Princess Parojinog urged President Rodrigo Duterte to investigate the series of raids carried out by the joint team of police and the Criminal Investigation and Detection Group (CIDG) agents in the family’s residences that led to the death of her parents and 13 others on Sunday.
— Davao Today