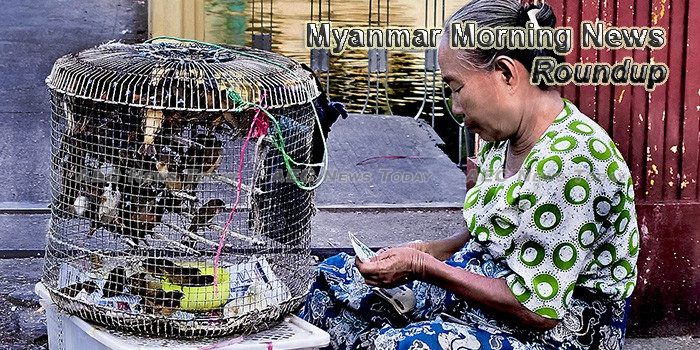 Commentary: The hard truth is that Rohingya refugees are not going home
The harrowing scenes of human suffering on the Myanmar–Bangladesh border have provoked outpourings of sympathy and some firm statements by international politicians.
— Channel NewsAsia

Rakhine crisis scares away tourists
Union of Myanmar Travel Association president U Thet Lwin said that some booked trips, particularly to Rakhine’s Ngapali beach, were cancelled in wake of the violence in Rakhine state.
— Thai PBS

Businesses urge overhaul of banks’ loan policy
Banking experts and senior officers from the International Council of Small Business (ICSB) said Myanmar must change its loan policy to make it easier for businesses to access debt for growth.
— Myanmar Times

Could Rohingya be given British protected status?
“No one can reasonable dispute that Rohingya are Myanmar citizens”, Have Your Say, October 10.
— The Nation

Suspect in Mon mega-project fraud case moved to police custody
Fraud suspect Supattha Chantharangsi, who was accused of duping hundreds of Thai companies to invest in a bogus Bt500-billion mega-project in Myanmar’s Mon state, was transferred from military detention to the Crime Suppression Division (CSD) in Bangkok on Wednesday.
— The Nation

Hong Kong’s flagship carrier increases Yangon flights
IN late October, Cathay Dragon will scale up the traffic capacity between Yangon and Hong Kong by an extra 60 percent. The flights target both Myanmar travellers who use Hong Kong as a transit hub for Northeast Asia and other continents as well as business travellers who move around in the region.
— Myanmar Times

Tatmadaw launched ‘systematic’ bid to drive Rohingya from Myanmar, says UN
Myanmar’s “systematic” crackdown on the Rohingya has been designed to permanently eliminate the minority Muslim community from their home in Rakhine State, the United Nations said Wednesday.
— Frontier Myanmar

The return of Tay Za
The public profile of one of Myanmar’s best-known – and perhaps most controversial – tycoons has been on the rise, a development broadly welcomed by the business community.
— Frontier Myanmar