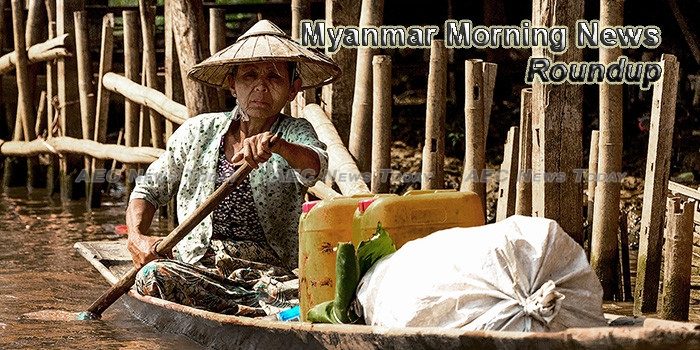 Myanmar army denies Rohingya abuses ahead of Tillerson visit
Myanmar’s army cleared itself of any abuses against Rohingya civilians on Monday (Nov 13), following an internal probe that a rights group said aimed to “whitewash” an ethnic cleansing campaign against the Muslim minority.
— Channel News Asia

Myanmar’s Lack of Cooperation with UN Investigators Underlines Global Issue
Last week, the Security Council adopted a presidential statement which called upon the government of Myanmar to cooperate with all UN bodies and mechanisms. The statement comes after months of allegations of killings, rape, and torture of Myanmar’s minority Rohingya Muslim population by security forces, and the government’s persistent denial of visas to members of a UN investigative team.
— Relife Web

Desperate conditions for thousands of Rohingya in Myanmar captured on night-vision video
We have witnessed scenes of shocking deprivation and desperation among thousands of stranded Rohingya Muslims in Myanmar, including emaciated women and newborn babies who have been dumped on beaches and left to die.
— ABC News (video)

Myanmar military denies atrocities against Rohingya, replaces general
Myanmar’s army released a report on Monday denying all allegations of rape and killings by security forces, having days earlier replaced the general in charge of the operation that drove more than 600,000 Rohingya Muslims to flee to Bangladesh.
— Reuters

Canada’s Special Envoy to Myanmar: ‘We have to try to engage Aung San Suu Kyi’
Since August of this year, 600,000 refugees have fled Myanmar to escape what the United Nations is calling ethnic cleansing.
— CBC

Myanmar assures ASEAN nations it is attending to Rohingya
A Philippine official says Myanmar’s leader, Aung San Suu Kyi, has assured other Southeast Asian nations that her government is implementing the recommendations of a commission led by former U.N. Secretary-General Kofi Annan on the situation in Rakhine state, where more than half a million Rohingya Muslims have fled to neighboring Bangladesh.
— Tampa Bay Times

America should act to end the ethnic cleansing in Myanmar
For far too many years a mix of repression, autocratic rule and marginalization has led to fear and crisis in Myanmar. The international community ought to pay attention to these atrocities before it is too late.
— The Guardian

Ministry vows speedier info release on Rakhine crisis
The information ministry vowed on Sunday to provide faster information about the on-going conflict in the northern Rakhine, where hundreds of thousands of Muslim residents have fled to the nearby Bangladesh to escape the recent eruption of violence in the area.
— Myanmar Times

Myanmar to pay for 3 defective planes
The government will honour its payment of loans contracted to purchase three planes from China which have all been grounded after only three months in service, said Union Deputy Minister for Transport and Communications U Kyaw Myo.
— Myanmar Times

Myanmar steps up its bioenergy production with Fujita rice-powered plant.
The rice husk-powered energy plant will also be able to sell 38,760 kilowatts of its energy a day, a surplus that adds up to around 12,700,000 kilowatts a year.
— Bio-Based World News

Myanmar market hits lowest point even as regional bourses spike
The Myanmar Stock Price Index dipped to its lowest point in its two year history, touching 465.52 on November 9 before recovering to close the week at 475.85 November 10. Trading in the four stocks listed on the Yangon Stock Exchange (YSX) remained poor, with Myanmar Thilawa SEZ Holdings, the fourth stock to list on the bourse, seeing the most activity.
— Myanmar Times

China Faces Increasing Competition in Myanmar
Japan and Singapore are stepping up their engagement with Myanmar, where China has long dominated.
— The Diplomat