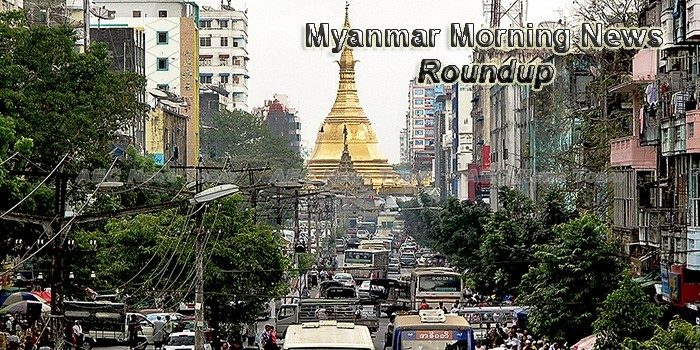 K55 billion allocated for National Health Plan
Basic primary healthcare packages will be implemented in the National Health Plan (2017-2021) for township and primary-level hospitals such as those with 16 and 25 beds, said its director Dr Thant Sin Htoo.
— Myanmar Times

Ministers give details of spending on disaster management
Union-level officials explained to Parliament on March 6 how they spent the funds they took from Ks18.3 billion (US$13.4 million) budget earmarked for managing natural disasters.
— Eleven

MOEAF requests for lifting of worker ban to Malaysia
The Myanmar Overseas Employment Agencies Federation (MOEAF) has urged the Myanmar government to lift its temporary suspension on sending workers to Malaysia, according to MOEAF officials.
— Myanmar Times

Minimum wage to be raised within the year
Speaking at a conference on Saturday, Thein Swe, Union Minister of the Ministry of Labour, Immigration and Population said that the government had plans to raise the minimum wage by the end of this year.
— Coconuts Yangon

PM seeks Jakarta help to send back Myanmar refugees
rime Minister Sheikh Hasina today requested the Indonesian government to play a role in sending back the Myanmar refugees from Bangladesh.
— The Daily Star

Over-invoicing found in development projects
The public accounts joint committee told the Parliament on March 6 through its report that developers’ proposed costs in government projects were higher than market prices.
— Eleven

Mandalay gets its first water park
In some strange twist of irony, Mandalay has received a surplus of water in the form of the city’s newest (and only) water park, just as Yangon citizens have pulled ourselves through six days of water shortage.
— Coconuts Yangon

134 mining blocks to expire this month
The Myanma Gems Enterprise under the Ministry of Resources and Environmental Conservation announced that a total of 134 authorised mining blocks in the country’s gemstone tracts are going to expire within this month.
— Myanmar Times

Government to return land to farmers
Dr Soe Than, regional minister for agriculture, livestock and irrigation, said: “We’re assessing the land. It shouldn’t take long. Within this year we will be able to give back the land to the owners.”
— Eleven

Women crucial for Myanmar’s development: State Counsellor
Many people, including women, have the impression that the fairer sex have equal rights in Myanmar, but in reality, they do not, said State Counsellor Daw Aung San Suu Kyi.
— Myanmar Times

MoE not responsible for religious content in textbooks
The Ministry of Education has responded to criticisms on social media that new civic education textbooks have included the four great religions – Buddhism, Islam, Christianity and Hinduism – by denying it is responsible for the curriculum.
— Myanmar Times