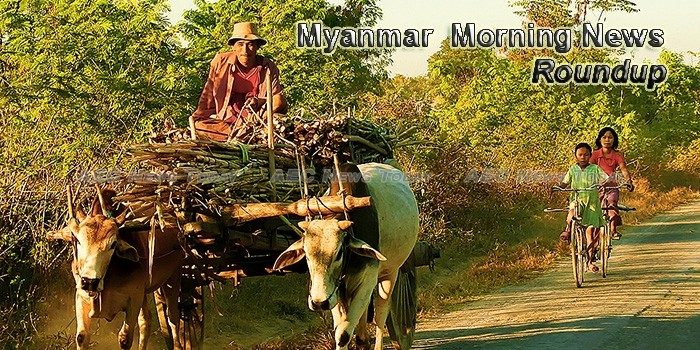 Australian mining company to back out of Myanmar investment
Australian mining firm Eumeralla Resources has announced it is planning to divest from its operations in Myanmar, almost four years after it applied for an exploration licence in the country.
— Frontier Myanmar

Myanmar-US bilateral trade reached nearly $330 million over past 10 months
BILATERAL trade between Myanmar and the US reached almost US$330 million in the first 10 months of this fiscal year, according to figures released by the Ministry of Commerce.
— Global New Light Of Myanmar

4m containers expected by 2025
Yangon’s ports are expected to receive more than two million containers by 2020, according to the Myanma Port Authority (MPA).
— Eleven

Current FY sees export value up by nearly US$400m
The export value with the foreign trade partners as of 3rd March in the current fiscal year 2016-2017 amounted to US$10,454.657million with US$ 6323.113mil through normal trade and US$ 4131.544 through border trade, according to the Commerce Ministry.
— Global New Light Of Myanmar

K50 million approved for road repairs in Bagan
THE Department of Archaeology, National Museum and Library (Bagan branch) has approved a request for K50 million from the Bagan Regional Development Association (BRDA) to repair and upgrade roads near the pagodas in the archaeological zone.
— Myanmar Times

Banana plantation in Myanmar breaches forests
Kachin State residents are reportedly seizing land from protected forests and selling it to Chinese entrepreneurs who want to grow tissue-culture bananas. An acre is reportedly sold for Ks500,000 (US$367).
— The Nation

Confident iflix aims high in Myanmar
GIVEN that iflix has received more than 11,000 subscriptions within one week after its launch in Myanmar, the Kuala Lumpur-based streaming service provider is confident that it will be successful in the market as a pioneer, said Adeana Greenlee, iflix’s country manger for Myanmar.
— The Nation

Government Currently Subsidising Electricity Bill
Ministers and industry experts say the government’s approach of paying the electricity bill using the union budget is a hindrance to the development of the sector.
— Consult-Myanmar

Hluttaw to recess after budget approval
HE 2017-18 National Planning Bill from the Union government was approved by Pyidaungsu Hluttaw on March 15, following a K296 billion cut from the original allocated amount.
— Myanmar Times

Drinking water to distribute daily to water-scarce villages in summer
Kyaukpadaung township rural development department is collecting household and population data at the villages which can face water shortage problem this summer. Township department head Daw Myint Win and her staff are conducting the field inspection to observe the water resources near those villages.
— Global New Light Of Myanmar

NLD faces uphill battle in Chaungzon after bridge name dispute
The National League for Democracy remains hopeful of claiming a by-election victory in Mon State’s Chaungzon Township, despite recent protests in the area over the naming of a bridge.
— Frontier Myanmar

Japan’s gamble to help Myanmar’s peace process
As clashes between ethnic insurgents and military forces in northern Myanmar continue, a Japanese-funded venture is endeavoring to help fortify the peace process between two of the oldest foes in the country’s 70-year conflict– the Karen National Union and the military.
— Nikkei Asian Review

Now is the time to invest, Myanmar
Myanmar government finance chiefs have urged to foreign businesses to capitalise on the opportunities now in the country.
— The Nation

Myanmar investigators meet Rohingyas in Bangladesh camps
A 10-member investigation commission from Myanmar arrived in Cox’s Bazar Sunday to meet the Rohingyas who had fled Myanmar’s Rakhine State since a military crackdown was launched in October last year.
— Dhaka Tribune

Myanmar’s ‘Rohingya issue’ is a regional refugee crisis – ASEAN must intervene
In June 2012, communal riots between Myanmar’s Rohingya Muslims and Rakhine Buddhists first erupted in the state of Rakhine. After the subsequent government crackdown and “persecution” of the area’s Rohingya, state-sponsored violence induced forced displacements of this Muslim minority.
— The Conversation AU

Thousands of Christians Flee Myanmar’s Conflict Zones to Escape Religious Persecution
With an escalation of fighting between ethnic rebel groups and government troops in Myanmar’s conflict areas that are spread along the country’s borders, civilians from ethnic and religious minorities are being forced to flee for safety. Tens of thousands of Christians have taken refuge in Malaysia, according to reports.
— Christian Post

The Secretariat proposed to serve as a museum
The Secretariat building, which is a colonial heritage with over a century of history, is under construction for major repairs but the Anawmar offered no specific details when they were contacted by the Myanmar Times.
— Myanmar Times

Vietnam morning news for May 22