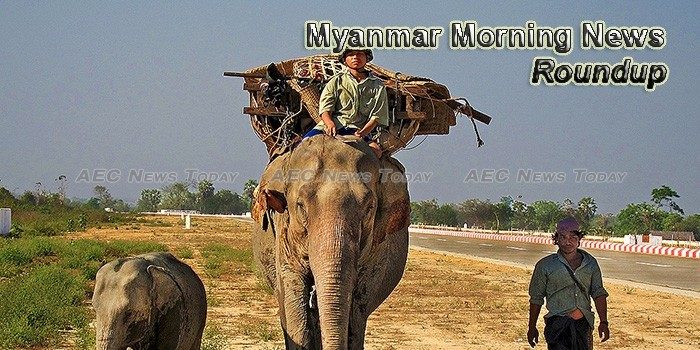 Myanmar FDA delays labelling of food products
Myanmar’s Department of Food and Drug Administration (FDA) has announced that the labelling requirements for local food products will be delayed by three months.
— Bangkok Post

K2 billion worth of illegal trade seized at Yaypu checkpoint
In order to crack down on illegal trading, the current government has launched the Yaypu Border Inspection Camp which seized roughly K2266 million worth of jade and timber within the first two months of its operation, according to information provided by the Camp.
— Myanmar Times

Press conference on performance of legal system in the first year of a new government
A press conference on the performances of the country’s legal system in the first one-year period of the new government was held at a meeting hall of the Ministry of Information yesterday, during which Union Supreme Court officials said the release of a new code of ethics for judges was imminent.
— Global New Light Of Myanmar

Thai court awards K100 million to sacked Myanmar workers
Sixty-five Myanmar workers, who were sacked by a Thai factory in Bangkok, have been awarded more than K100 million (Thai baht 2,751,000) in compensation, according to the Thai based Aid Alliance Committee (AAC).
— Myanmar Times

SMEs squeezed with little government support
After the new NLD-led government came into office, supporting small and medium enterprises (SMEs) was included in the 12-point economic policy released by the administration last year. A year has passed but little has changed for those enterprises so far.
— Myanmar Times

2017 by-election turnout rate fails to reach 37 percent
The voter turnout rate for last Saturday’s by-election was the lowest in Myanmar’s recent history. According to Eleven, only 784,909 of the 2,130,208 eligible voters – or 36.85 percent – ended up voting on election day.
— Coconuts Yangon

UN convenes Rohingya abuse investigation, but Myanmar says it won’t cooperate
The UN’s main human rights body is assembling a team to probe alleged atrocities against Myanmar’s Rohingya, even as the government appears set to deny investigators access to areas where crimes against humanity may have occurred.
— IRINnews.org

NLD must heed by-election lessons
The NLD reclaimed most of the seats it had won in 2015 during the weekend’s by-elections, but the threat to the party’s future mandate is clear.
— Frontier Myanmar