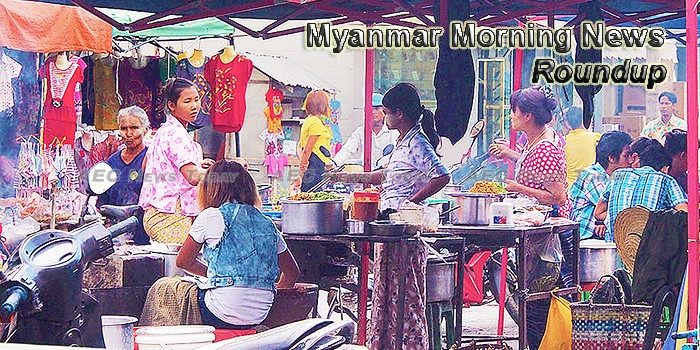 Yangon MP targets corruption
Government staff in Yangon Region are involved in the misuse of public finances, according to regional MP Than Naing Oo, representing Pabedan constituency no.1.
— Eleven

Myanmar sees gains in rice, corn production
Rice and corn production in Myanmar is expected to increase in the 2016-17 marketing year, while production of wheat is forecast to fall, according to an April 20 report from the Foreign Agricultural Service (FAS) of the U.S. Department of Agriculture (USDA).
— World Grain

AccorHotels expands base in Myanmar, to open 5 new hotels by 2019
International hotel chain operator AccorHotels plans to open five new properties by 2019 in Myanmar as part of its strategy to expand its base, said a top company executive.
– The Economic Times

Indian Government Considering Afghanistan, Myanmar’s Proposal to Boost Pharma Exports
India is examining a proposal from Afghanistan to help set up a manufacturing base for pharmaceutical products, along with another proposal from Myanmarto supply generic drugs, as part of its efforts to shore up declining exports.
— Consult-Myanmar

Mosque Imam in Rathedaung Charged with Causing Fire by Negligence
Myanmar’s authorities charged an Imam (Islamic Prayer Leader) with causing fire on a mosque through negligence in Rathedaung Township on Wednesday (Apr 26), according to reliable sources.
— Rohingya Vision

Monetary help for pregnant women, Rakhine State given high priority
The Union government announced that it will further expand care for its people by providing monetary assistance to pregnant women, with the people of Rakhine State one of the first states to receive this money.
— Global New Light Of Myanmar

Kachin govt to restore jade land with private company
The Kachin State government is cooperating with a private company to repair the jade-rich Hpakant and Lonekhin townships, sources say.
— Eleven

Amnesty calls on authorities to take immediate action over threats against Sittwe-based journalist
Amnesty International has launched a campaign in support of journalist Nay Min Aung, who has been receiving death threats for his reporting on the Arakan Army (AA).
— Coconuts Yangon

Magwe Chief Justice: Misuse of Public Funds Could Finish USDP
The chief justice of Magwe Division said the former ruling Union Solidarity and Development Party’s (USDP) spending of a public fund was illegal and could lead to the party’s cessation.
— The Irrawaddy