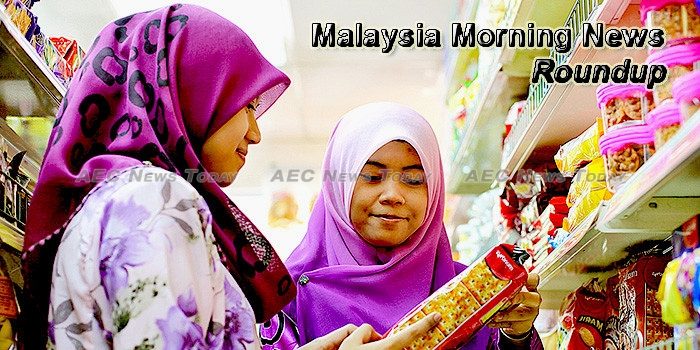 Malaysia, Indonesia, Philippines to appoint POC for intelligence information
exchanges
Malaysia, Indonesia and the Philippines have agreed that each country
appoints a ‘point of contact’ (POC) from among their military and police
personnel to facilitate exchange of intelligence information on security
threats, including from Daesh militants.
—The Borneo Post

Malaysia Market Poised To Snap Losing Streak
The Malaysia stock market has moved lower in three straight trading days, falling more than 15 points or 0.8 percent in that span. The Kuala Lumpur Composite Index now rests just above the 1,765-point plateau although it may find traction on Monday.
—Business Insider

Markets not pricing in geopolitical tensions
When American political analyst Brian Klaas said at the start of 2017 that this would probably be the biggest year for political risk since World War II, few would have expected the current level of tension between the US and North Korea. Conservative US radio host Mark Levin even thinks we “may be on the brink of war”.
—The Edge Market

New blueprint set to boost northern region GDP to RM300bil
A new blueprint for the Northern Corridor Economic Region (NCER) is targeting 80 projects across four states that planners expect will boost gross domestic product (GDP) in the area to RM300bil by 2025.
—The Star Online

HLIB Research revises Q2 GDP forecast to 5.8%
HLIB Research has raised its growth forecast for the Malaysian economy to
5.8% for the second quarter (Q2) from 5.5%, after the release of various
indicators that showed higher strength.
—The Sun Daily

Planters in for better earnings on higher palm oil price
Most planters’ second quarter results (Q2 2017) to be released this week are expected to record further improvement, bouyed by higher crude palm oil (CPO) production and prices.
—The Star Online

Ringgit likely to strengthen in tight-range trading next week
The ringgit is expected to strengthen slightly but move in a tight range of between 4.2800 and 4.2900 against the US dollar next week on mixed market sentiments, a dealer said.
—The Sun Daily

August 31 is new deadline for 1MDB
The International Petroleum Investment Company (IPIC) has granted the Ministry of Finance Malaysia (MOF) and 1Malaysia Development Berhad (1MDB) until August 31, 2017 to complete the payment that 1MDB owes to IPIC.
—Astro Awani

EESL’s LED success story: UK done, up next Malaysia
Buoyed by the success of LED bulb distribution at USD 1 per unit in India and the UK, the state-owned EESL is getting ready to enter Malaysia next month with an initial plan to sell 1 million lamps.
—Economic Times

Leadmont explains Star City project delay
The halt of the mixed development Selayang Star City project since early this year has raised eyebrows in the property market, giving rise to concerns that it could be a sign of more such occurrences.
—The Sun Daily

No cause for concern over bank’s liquidity, says Maybank
Malayan Banking Bhd (Maybank) said its liquidity conditions remain
comfortable, with a loan-to-deposit ratio (LDR) of 94.7% as at end-March
2017.
—The Edge Markets