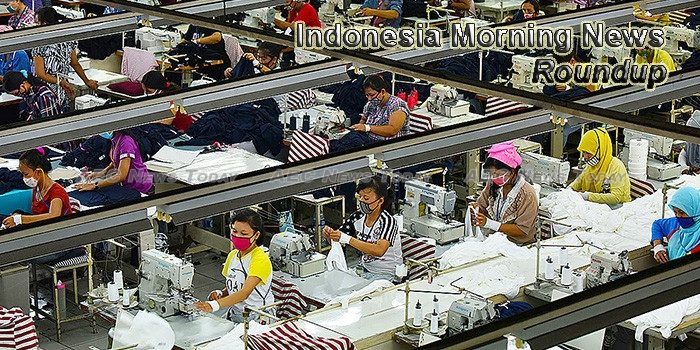 Govt launches 16th economic package to boost investment
The policy aims to speed up the issuance of business permits while providing greater certainty on the cost and time involved and to improve coordination between ministries and provincial administrations.
— The Jakarta Post

Large 6.2 magnitude earthquake hits Indonesia
Tremors were reportedly felt as far away as Singapore and Kuala Lumpur, which are both east of the island.
— Independent

Singapore and Indonesia air forces to mark bilateral relations milestone with combined flypast
The public can catch the rehearsal and actual flypast around the Marina South area on Sep 5 and 7.
— Channel NewsAsia

Indonesia launches US$2 million Hasco program for Rakhine State
The humanitarian aid worth US$2 million donated by Indonesians will be channeled into a two-year series of social programs for education, health, livelihood, and post-conflict recovery.
— Antara

Ministry is Rp431tn Short on Infrastructure Budget
The ministry needs a total of Rp1,915 trillion to build infrastructure as planned, while the budget is only Rp1,289 trillion.
— Tempo (EN)

Indonesia cheers Freeport ‘win’ as Grasberg valuation fight looms
The bombastic statement illustrates Indonesia’s view that the dispute with Freeport over the mine was all about asserting the country’s rights to its mineral resources.
— Reuters

Lynched Over an Amplifier: Mob Justice Alarms Indonesians
The lynching in Bekasi, a gritty, industrial suburb of Jakarta, has shocked Indonesia and opened a broader discussion about why vigilante mobs continue to torture and execute petty criminals in the country.
— New York Times

Chain-smoking children: Indonesia’s ongoing tobacco epidemic
The country has the highest percentage of male smokers globally and among the highest rate of adolescent and child smokers in the world.
— CNN

Jokowi Must Bring Justice to Indonesia’s ‘The Disappeareds’: Rights Groups
The groups urged Jokowi to meet the government’s obligations under international law and fulfill his own promise to solve past cases of human rights violations
— Jakarta Globe

After Ahok: Indonesia Grapples with the Rise of Political Islam
For decades, Indonesian society has experienced a slow process of Islamization. In 2017, the pace picked up.
— The Diplomat