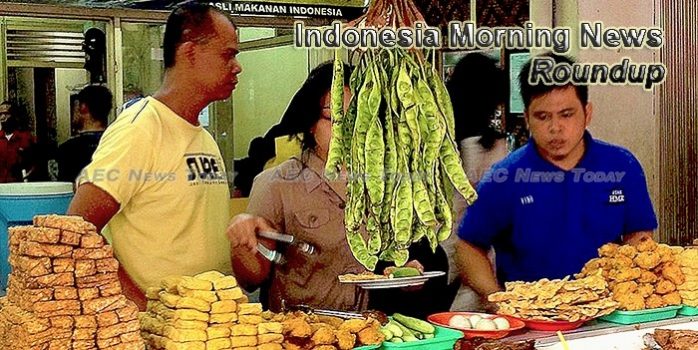 Repatriated funds from Singapore reaches Rp 84.52 trillion
From the Rp 835.7 trillion (US$62.74 billion) of funds parked in Singapore declared during the the tax amnesty, as of the final day of the program on Thursday only Rp 84.52 trillion had been repatriated.
— The Jakarta Post

Indonesia to share expertise with Afghanistan
Indonesia will soon host the leader of Afghanistan, the latest in a string of state visits that will help solidify Indonesia’s international standing as an influential middle power and major economic player.
— The Jakarta Post

France’s Engie Inks Deals Worth More Than $1b With Indonesian Renewables Partners
Engie has signed partnership agreements worth more than $1 billion with local partners in Indonesia to tap renewable energy in the archipelago, the France-based multinational utility company said in a statement on Wednesday (29/03).
— Jakarta Globe

Exclusive: Indonesia Eyes Decree on Tobacco After Bill Runs Into Opposition
Indonesia’s government has proposed issuing a decree to govern the domestic tobacco industry, a move that could sharply raise cigarette output in the world’s fourth-most populous nation, after a bill outlining the changes was opposed by the health ministry and anti-smoking groups.
— U.S. News & World Report

Indonesia maintains death penalty amid criticism
Indonesia has decided to keep capital punishment in the country’s judicial system despite a call from the United Nations for a worldwide moratorium on executions.
— The Jakarta Post

51 Indonesian Human Trafficking Victims Found at Malaysian Factory
At least 51 Indonesian citizens have been identified as victims of human trafficking at a bird’s nest factory in Selangor, Malaysia, the Ministry of Foreign Affairs said on Thursday (30/03).
— Jakarta Globe

Indonesia to export rice to Malaysia
Indonesia will export 15 to 50 thousand tons of rice to Malaysia in an effort to meet the neighboring countrys demand and requirement for the commodity.
— Antara News

Rubber Glove Industry of Indonesia Needs a Cheaper Gas Price
Rubber gloves manufacturers in Indonesia are pessimistic about their business in 2017. This pessimism is caused by the lack of clarity whether – or when – the Indonesian government will lower the gas price for the rubber glove sector. Indonesia’s high gas price gives rise to high operational costs for Indonesia’s rubber glove producers. Reportedly, a number of local rubber glove factories have ceased production since late-2015.
— Indonesia Investments

NU, Muhammadiyah call on members to avoid 313 rally
Nahdlatul Ulama executive board chairman Marsudi Syuhud has called on members of the largest Muslim organization in Indonesia to refrain from participating in Friday’s mass rally organized by Islamic group the Muslim People’s Forum (FUI).
— The Jakarta Post

Indonesia’s tax amnesty passes its deadline
LAST year Indonesia’s finance minister, Sri Mulyani Indrawati, invited chief executives, directors and shareholders from the country’s leading industries to banquets at her ministry. As they munched, she would give presentations setting out who among them had—and, by omission, who had not—signed up to the government’s tax amnesty. “This may be the most expensive dinner in your lifetime,” the 54-year-old economist recalls telling them.
— The Economist

Indonesia the world biggest Islamic bonds issuer
The Indonesian government has been the largest global sukuk (shariah bond) issuer issuing bonds worth US$13.1 billion after it routinely issued US dollar-denominated Islamic bonds since 2009, Director General of Finance and Risk Management at the Ministry of Finance, Robert Pakpahan, said here, Thursday.
— Antara News

Freeport seeks eight-month extension of negotiation
PT Freeport Indonesia has asked the government to extend the negotiation of its contractual dispute for eight months, Director General of Mineral and Coal at the Energy and Mineral Resources Ministry Bambang Gatot said.
— Antara News