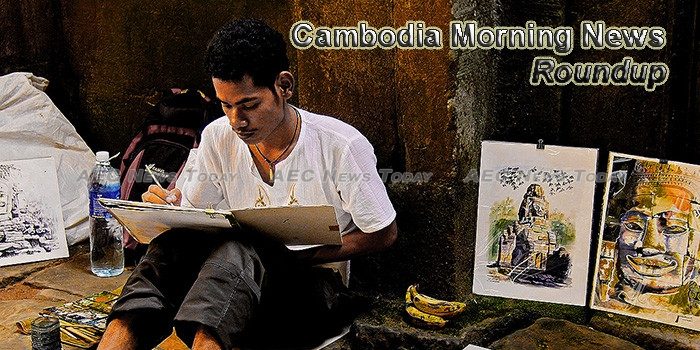 Cambodia Property Market Prepares For Second Real Estate Show
With new property developments either commencing or completing on a monthly basis the Cambodia property market is one of the most dynamic in the region, and a driving force behind the country’s 7.16 per cent average GDP growth rate over the last five years.
— AEC News Today

Kingdom to enjoy special status at China biz event
Cambodia has been selected as the Country of Honour for next year’s China-Asean Expo (CAEXPO) and China-Asean Business and Investment Summit (CABIS), a high-profile annual business event held in Nanning, China, that aims to expand business cooperation between China and the 10 Asean member states.
— The Phnom Penh Post

Cambodian Opposition Politicians Barred From Visiting Kem Sokha in Jail
Cambodian opposition party lawmakers were turned away from a prison in the country’s Tbong Khmum province on Monday following a failed second attempt to visit jailed CNRP leader Kem Sokha, who is being held on a charge of treason, sources said.
— Radio Free Asia

Vietnam looks to give fishery assistance to Cambodia
Vietnam has expressed inter-est in investing in Cambodia’s aquaculture sector and providing technical support to help boost fisheries production, according to Vietnamese media reports.
— The Phnom Penh Post

Vietjet connects Ho Chi Minh City with Cambodian capital Phnom Penh
Vietjet has started selling tickets for the Ho Chi Minh City (Vietnam) – Phnom Penh (Cambodia) route. The new route will be put into operations as of November 24, 2017, looking to meet the trading and traveling demands between the two famous economic and financial hubs of Vietnam and Cambodia.
— eTN

Official warns ex-RFA staffers about continuing to work in Cambodia
Information Ministry spokesman Ouk Kimseng on Friday made a thinly veiled threat to jail Radio Free Asia reporters if they continued to work in the Kingdom, following the broadcaster’s announcement last week that it had ceased in-country operations.
— The Phnom Penh Post

Journalists’ Forum Assam Concerned about Cambodian Crackdown
Journalists’ Forum Assam (JFA) in northeast India expresses concern over the ongoing crackdown on newspaper & radios in Cambodia with an aim to silence the media ahead of next year’s general election. The recent shut down of an independent English newspaper in the southeast Asian country has shown the authority’s intolerance towards the mainstream media, alleged the forum based in northeast India.
— Scoop World

Hun Sen tightens grip on power as Cambodia pivots to China
Mu Sochua, the deputy leader of Cambodia’s main opposition party, says her country’s government is waging “psychological warfare” on its opponents in an effort to break them.
— Financial Times

Cambodia’s Hun Sen a master of manipulative, ruthless rule
When it comes to clinging to power, Hun Sen is probably the master. The Cambodian prime minister even surpasses retired or existing leaders of Vietnam, his past main backer, and of China, his present primary supporter, in terms of longevity in office.
— Asia Times

Fresh arrest over Facebook criticism of Hun Sen
A 20-year-old woman was charged in Banteay Meanchey Provincial Court yesterday with incitement and public insult for posts made on Facebook about Prime Minister Hun Sen and the Queen Mother.
— The Phnom Penh Post

As Cambodians Venerate Ancestors, Political Tensions Pushed Aside
Cambodians are this week celebrating Pchum Ben, or Ancestor’s Day, an important religious festival in the Khmer calendar. Despite rising political tensions ahead of next year’s election, Cambodians have headed to the pagoda to give offerings, putting aside concerns over their country’s future.
— VOA Cambodia

Nail painting helps build Cambodian hospital
Contributing his aid and his good humour, Darte agreed to have his nails painted at a recent meeting of the Niagara-on-the-Lake Rotary Club, helping to raise about $4,500 to raise awareness of the plight of women in Cambodia, where only 15 per cent of them have access to medical care.
— Niagara Advance