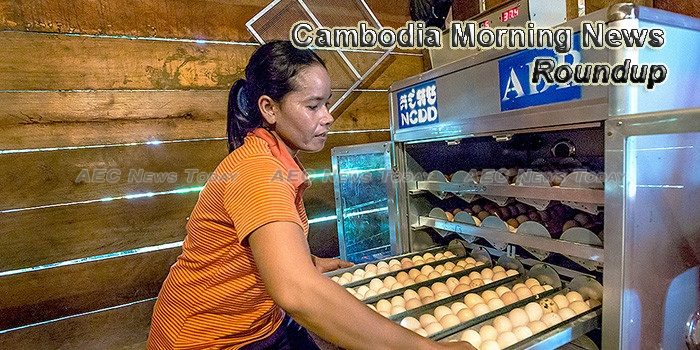 Cambodian PM leaves for China to seek more aid
Cambodian Prime Minister Hun Sen, facing Western donor pressure over a crackdown on critics ahead of 2018 elections, will seek more aid and investment from China during a visit this week, his aide said on Wednesday.
— Reuters

Economy won’t be a casualty: analysts
Despite the widely condemned pre-election dissolution of the Cambodia National Rescue Party, the country’s only major opposition party, by the Supreme Court earlier this month, the heightened risk of political instability is expected to have limited short-term economic spill-over effects, according to an assessment from the risk advisory firm Access Asia Consulting Co Ltd.
— The Phnom Penh Post

Thai PM receives newly-appointed Cambodian ambassador
The new ambassador of Cambodia to Thailand has paid a courtesy call on the Thai Prime Minister, expressing thanks for the Kingdom’s continued support for the two countries’ relations.
— NNT

Government rights head meets envoy
The interim representative of the UN’s High Commissioner for Human Rights in Cambodia met yesterday with the head of the Cambodian government’s rights body, voicing concerns about the threatened closure of a prominent outspoken local NGO.
— The Phnom Penh Post

US ambassador says Cambodia ‘not interested in a positive relationship’ with US
In an unusually candid interview yesterday, United States Ambassador to Cambodia William Heidt questioned whether the Cambodian government ever had “an honest desire” to form a relationship with the US, as Prime Minister Hun Sen continues to claim the superpower backed a purported “revolution”.
— The Phnom Penh Post

Cambodia Launches Probe Into Leading Rights Group Following Call From PM Hun Sen
Cambodia’s government on Wednesday launched a probe into a leading human rights organization, days after Prime Minister Hun Sen threatened to shut it down, prompting an outcry from groups who called the move further evidence of the country’s slide into dictatorship ahead of elections next year.
— Radio Free Asia

Is Cambodia’s Opposition a Victim of its Own Success?
The Cambodian government was semantically correct when it said, following the CNRP’s dissolution, that Cambodia still has a multi-party system.
— The Diplomat

Cambodia signs agreement to ensure welfare of maids in Malaysia
The Cambodian government has signed a Memorandum of Agreement to appoint the Malaysian Association of Foreign Maid Agencies (PAPA) as its representative to monitor the safety and welfare of its citizens returning to work as domestic helpers in Malaysia.
— Channel NewsAsia

Business Insider: Joonaak delivering convenience
As consumer habits shift and online shopping continues to grow in Cambodia, the need for reliable and timely package delivery services is on the rise.
— The Phnom Penh Post