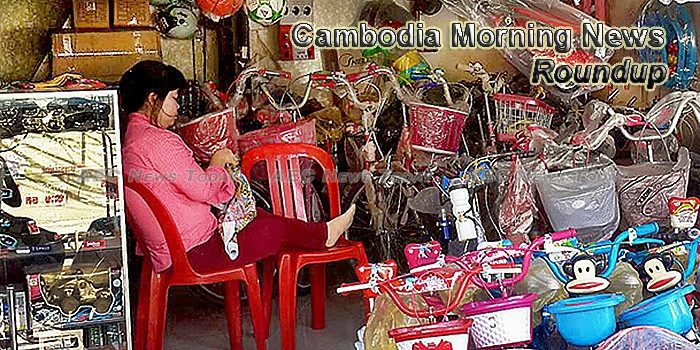 Illicit trade costs millions
Illicit financial flows in and out of Cambodia starved the Kingdom of at least $360 million in lost taxes annually between 2005 and 2014, according to a new report.
— The Phnom Penh Post

Rice millers balk at export fees
Numerous members of the Cambodia Rice Federation (CRF), the body tasked with lobbying on the sectors behalf, have stopped paying membership dues and export fees, claiming that they cannot afford to as the industry continues to struggle with high production costs and regional export competition.
— The Phnom Penh Post

Thai Company Weighs Building Cambodia’s First Steel Mill
A Thai company is looking into building Cambodia’s first steel mill, aiming to cash in on the country’s construction boom and send exports from a dedicated seaport in Sihanoukville or Kampot province, according to the Industry Ministry.
— The Cambodia Daily (paywall)

Court Issues Arrest Warrant for Runaway RFA Journalist
On the eve of World Press Freedom Day, the Phnom Penh Municipal Court on Tuesday issued an arrest warrant for a Radio Free Asia (RFA) journalist after he skipped a court summons related to a prison visit he made with opposition politicians.
— The Cambodia Daily (paywall)

N. Korean Ambassador Says Cambodia Could Play Productive Role in Mediating Dispute: Report
North Korea’s ambassador to Cambodia has suggested that Cambodia could play a role in finding a diplomatic solution to escalating conflict on the Korean peninsula.
— VOA

Boosted By Hydropower, Coal, Cambodia Expects to Become Regional Electricity Supplier
Cambodia has said it expects to be able to move from importing nearly all of its electricity from neighboring countries to a net electricity exporter by 2030.
— VOA

NEC calls for neutrality on FB
An election official warned Facebook users not to make any politically charged posts the day before the election yesterday during a three-day training session on campaign monitoring, with observers accusing him of overstepping the bounds of a rule forbidding parties from campaigning on that day.
— The Phnom Penh Post

MFI loans used for illegal logging
A conservation NGO official yesterday said he planned to ask microfinance lenders to better scrutinise their loans after a spate of cases over the last month showed that such loans had been used by illegal loggers to purchase chainsaws and tractors for transporting timber.
— The Phnom Penh Post

South African Man Receives Life Sentence for Cocaine Trafficking
The Phnom Penh Municipal Court on Tuesday handed down a life sentence to a South African man who entered the country with half a kilogram of cocaine valued at $90,000 in his stomach.
— The Cambodia Daily (paywall)

Dismissal of Khmer Rouge Atrocity Charges Sparks Calls for End of Prosecutions
Since the Khmer Rouge tribunal decided to drop all charges against former regime official Im Chaem in February, numerous ex-cadres have come forward to call on the court to dismiss charges they face in upcoming cases.
— VOA

Interview: ‘We Didn’t Want the Ministry to Collude with the Companies to Destroy the Evidence’
Alejandro Gonzalez-Davidson, director of the NGO Mother Nature Cambodia, was expelled from Cambodia in February 2015 and placed on a black list that prevents his return to the country.
— RFA

S. African jailed for life in Cambodia for trafficking cocaine
A Cambodian court on Tuesday convicted a South African man of cross-border drug trafficking and sentenced him to life in prison, according to a verdict.
— Xinhua

The Artists Fighting Displacement in Phnom Penh
Generations have lived and worked in the White Building in Cambodia’s capital. Now, they’re looking for a way to stem the tide of redevelopment that would push them out.
— CityLab