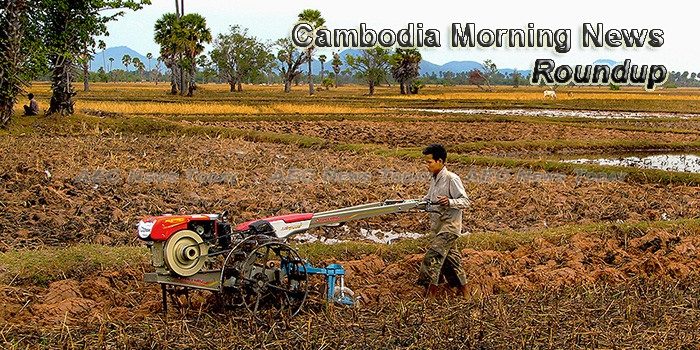 Bangladesh PM and Hun Sen sign 10 deals
Cambodia and Bangladesh made a fresh push today to revive bilateral trade initiatives, with the two leaders of the countries signing nine memorandums of understanding (MoUs) and one agreement in support of trade, economy, investment and technical cooperation initiatives.
— The Phnom Penh Post

Illegal imports hogging local market for pigs, say farmers
Cambodian pig farmers are facing a mounting crisis as the price of pigs has continued to plummet, with many blaming local officials for allowing Vietnam to illegally import pigs across the border, representatives from a farmers association said at a press conference yesterday.
— The Phnom Penh Post

Damco aims to keep up with the rapid growth of Cambodian exports
Over the course of the last 10 years that Damco has been operating in the Kingdom, it has fast become a market leader in providing innovative freight-forwarding and logistics services for Cambodian and multinational companies that are moving goods to large consumer markets whether that is by land, sea or air.
— The Phnom Penh Post

For Cambodia’s Women Entrepreneurs, Barriers to Expansion May Be Starting to Crumble
Although about 65% of all businesses in Cambodia are owned by women, they lack access to finance, training, mentorship and information that could allow more women to grow their businesses.
— VOA

Rare frog-headed turtle brought back from the brink
Chan Nin has lived for a long time by the Mekong River in Kratie province, about 280 km northeast of Phnom Penh. In her younger years, she learned to do what other villagers did: she hunted turtle eggs for food.
— Mekong Commons

Technology Leaders from Cambodia Leave US with Ideas
Five technology experts from Cambodia had never met each other until they made a three-week trip to the United States.
— VOA

Clean water shortage at Sesan
Even as floodwaters pour into their villages and encroach upon their resettlement sites, villagers displaced by the controversial Lower Sesan II Dam in Stung Treng province say they are now facing shortages of potable water.
— The Phnom Penh Post