So you think you can drive? try and match these Thai drivers 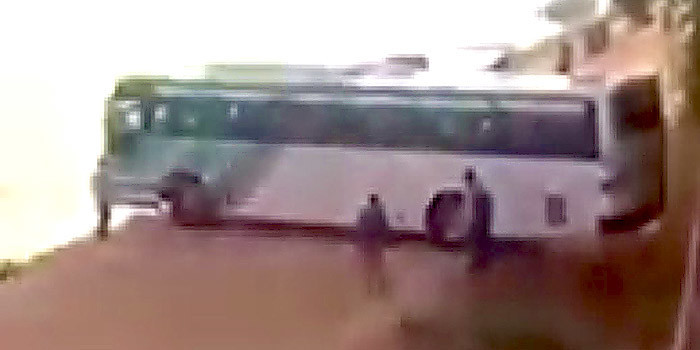 Anyone who has ever spent any time in Thailand will readily attest to the less than stellar driving habits of Thais. Pedal-to-the-metal Thai drivers push their often overloaded pickups, cars, trucks, vans and buses along the nations roads at breakneck speed.

Newcomers to Thailand from countries where road traffic laws are more judiciously enforced rapidly discover that Thailand road laws such as keep to the left, sidewalks only being for pedestrian use, and that ‘one-way’ actually refers to the direction someone wants to travel and not meant to regulate the orderly flow of traffic are nothing more than suggestions.

Similarly white lines, double lines, amber or red traffic lights, stop signs, give way rules, and rendering assistance after a crash are also really only suggestions and not rules that are meant to be obeyed… frequently resulting in carnage. It’s not for no reason that Thailand has the world’s second most deadliest roads (See: Playboy Bunny Fearz Poonnada Killed Drunk Driving in Thailand).

It’s not all doom and gloom though. Just when one could be forgiven for thinking that driving skills and Thailand are an oxymoron, evidence emerges of the contrary.

In the video above a semi-trailer driver performs what at first glance appears to be a near impossible u-turn on a dirt road barely wide enough for two cars to pass, jackknifing his dump trailer and narrowly avoiding deep culverts on each side of the road.

With his rear wheels hanging over the drop-off and his front wheels pressing down heavily on the very edge of the roadway embankment, the driver spins the steering wheel from full lock in one direction to full lock in the other, gingerly inching his big rig around. Just when it seems almost certain that either the prime mover or trailer are headed for an embarrassing fall he guns the engine and drags the trailer round by brute force, both sets of rear trailer wheels gripping nothing but air as the u-turn is completed.

In the video below an equally determined Thai tourist coach driver performs a similarly ‘impossible’ u-turn on a dirt-road barely wide enough to accommodate the distance between his front and read wheels. As diners at a nearby restaurant watch the coach is moved backwards and forwards, narrowly avoiding a deep storm-water culvert at the rear and an equally precarious drop into a river in front.

To the delight of those in the restaurant (possibly his passengers) the driver manages to avoid catastrophe and completes the challenging maneuver successfully before pulling up in front of the restaurant to cheers and applause… albeit on the wrong side of the road.