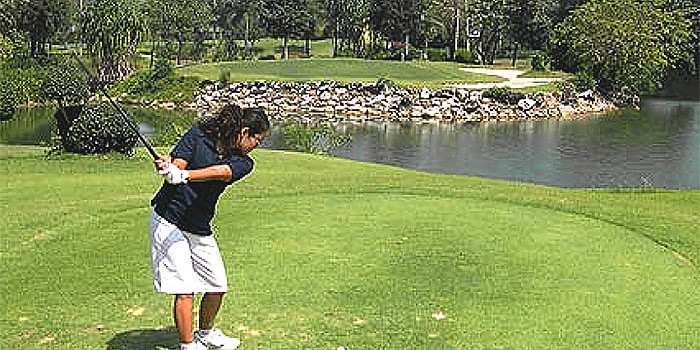 When you play five-star courses in major urban areas it is easy to become blasé about the standard of golf you become used to. But every now and then if you take the chance to explore beyond the obvious you come across something special, unexpected, and really worthwhile when you least expect it. That’s the joy of playing at Royal Ratchaburi golf course. It’s a secret gem around two hours west of Bangkok by car, and thanks to Google Maps, remarkably easy to find.

Best known by tourists for its famous Damnoen Saduak Floating Market, Ratchaburi province also boasts limestone ranges in the west, as well as forests and the Khao Chong Phran bat caves. Ratchaburi town also has a vibrant vegetable market and numerous kilns producing signature glazed pots, so it’s a fun place to explore, even if you are not a golfer.

The Royal Ratchaburi golf course is located just a few kilometers beyond the western edge of the town. Developed in 1988 and opened in 1994, it has the easy feel of a course that has settled perfectly into its environment over the years. Open every day of the week, the 18 holes encompass 6,204 metres (6,785 yards) for a par 72.

The remote location of the Royal Ratchaburi golf course affords some spectacular scenery, but not at the expense of the course itself, which is excellently maintained. The fairways, laid sensitively into the undulations of the land by designer Artanan Yomchinda, are complemented by greens that are very well kept for such a rural setting.

The first nine holes are generally regarded as somewhat easier than the second nine, with its wider fairways being a little more forgiving. On the second nine the fairway entrances tighten up on a number of holes and much greater accuracy is needed.

Another aspect of the course worth commending is the standard of the changing sheds and showers. The design might be basic, but they were spotlessly clean and very well maintained on our visit, making the total experience really pleasant. You just get the feeling someone really cares about the place.

That’s not to say there aren’t some unusual hazards. The rural setting of the Royal Ratchaburi is well populated by monkeys who can make short work of bags or food left unattended in your cart.

Some holes are so well known as haunts for the locals that the caddies take turns to guard the cart while you complete your putting on the green. On the course itself there’s plenty to test your accuracy and length. Some testing par fives and one very long par four interspersed with some challenging par threes requiring very accurate shots across canyons and down steep slopes.

And Then There’s The Water…

I like to think of myself as a reasonably thrifty golfer, not too wayward on a good day. But the par four, 14th hole sunk me in spades.

Okay, so it was the number one handicap hole, but on the tee you are presented with a Scylla or Charybdis choice of going the ‘safe’ long way around a dog leg left to the green, or chancing your arm on the straight shot over water – avoiding bunkers on the left, along with a major tree and water on the right – to land on a little island platform for a seductively easy second shot onto the green.

I couldn’t resist the temptation, and two wet balls later understood why the smart money goes right. But that’s the fun of the Royal Ratchaburi golf course. It’s not the flat up and back terrain of so many courses on the Bangkok plains. You have to think about this place. Take time to plan the shots, and then, make sure you nail them.

The Best Surprise at Royal Ratchaburi

But perhaps the most pleasant surprise about this little hidden wonder is the price. Midweek green fees at the Royal Ratchaburi golf course are just US$26 (Bt910), including the services of a caddie. On weekends the green fee increases to $35 (Bt1,240), also including the caddie fee. You can share a golf cart for another $17 (Bt600) and if you need to rent clubs these also cost just $17 (Bt600).

The only blemish on the day’s outing came the end of the round. When we went into the rather plain but air-conditioned restaurant to enjoy a cooling beer and some Thai food for lunch, we were pounced upon by what seemed an inordinate number of flies.

Although the food was great and the beer was nice and cold, the energy spent swatting the flies away took the shine off the moment. It was unfortunate, but those who have lived and visited Thailand for golf understand that perfection in every aspect is a very rare quality indeed.

Roving Golf Correspondent
Justin Barnett has lived and worked in Asia for more than 17 years. Best known to his friends as the ‘knackered hacker’ for reasons which need no further explanation, his passion for golf significantly exceeds his ability.

His relentless pursuit of ‘the one’ great shot keeps him heading back to the tee box, where he encounters every experience felt by all amateur golfers.

He is fiercely proud that playing golf is not his ‘day job’, but he continues to seek new ways to bring zen to his game’.