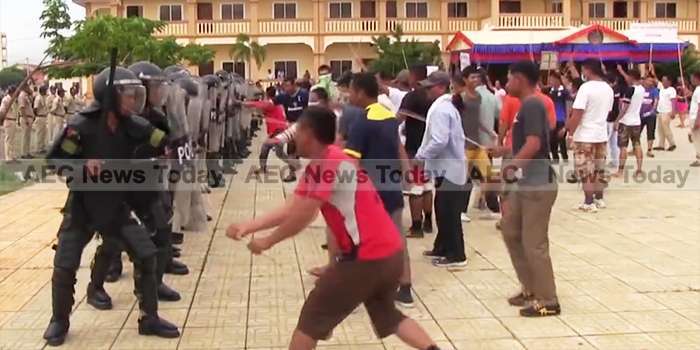 Holding shields, throwing smoke grenades, and advancing on mock-protestors armed with sticks and juggling batons, the footage shows the Cambodia police putting their crowd control training such as rapid mobile formation deployment, and the use of snatch squads to break through skirmish lines and detain targetted individuals.

CNP Commissioner Neth Savoeun told The Phnom Penh Post that some 270 members from nine provinces joined the anti-riot training and are now “ready to confront protesters”. The training, aided by Vietnamese specialists, is said to be  just the first, with more in the works.

The training appears to be a response to the Cambodia National Rescue Party’s (CNRP) call for mass protests in the event deputy party leader Kem Sokha, is arrested.

Referring to the protests in the wake of the of the 2013 Cambodia general election which saw one person killed by Cambodia security forces, Commissioner Savoeun told the Cambodia Daily the training was necessary, blaming protestors for “breaking their promises to remain peaceful”. He said Cambodia police need training in how to deal with protests, how to respect the law in those situations, and how to come to a resolution.

The Cambodia police training comes at a time of rising tensions over civil disobedience and Cambodia’s contracting political space. On October 11 land rights protestors were assaulted by security forces while on their way to the Cambodia Ministry of Land Management, Urban Planning and Construction to deliver a petition.

The CNP video was released just days ahead of the latest visit to Cambodia by Chinese President Xi Jinping which saw a number of China-Cambodia agreements signed. Day’s after President Xi’s visit Cambodia Defence Minister Tea Banh announced that he had just signed some “protocols”  with China to modernise and strengthen Cambodia’s national defence.