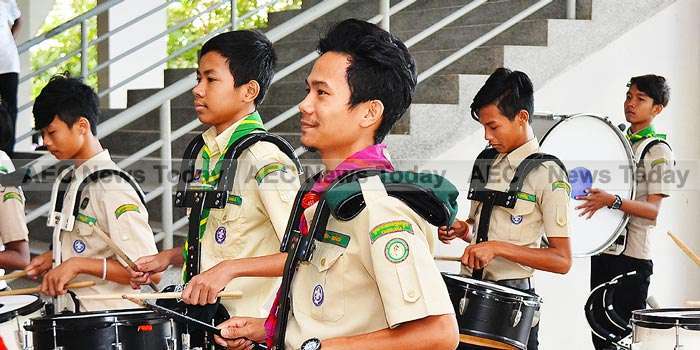 Cambodia has celebrated United Nations Volunteer Day with a two-day event comprising a high-level dialogue panels on the role of volunteerism in realising Cambodia’s Sustainable Development Goals (SDGs) and a showcase of the various volunteering programs available for participation.

Opened by Tauch Choeun, director general of the General Department of Youth at the Ministry of Education, Youth and Sports (MOEYS), the International Volunteer Day forum held at the Institute of Technology of Cambodia (ITC) focused on the importance of volunteerism for the reduction of poverty and for sustainable development.

Volunteerism is indispensable not only in Cambodia but in other parts of the world as it promotes sustainable development, social inclusion, community mobilisation, local capacity, social cohesion and other measures of progress.

In an opening remark, Mr. Tauch  said: “Volunteer work contributes a great deal to the reduction of poverty and sustainable development in Cambodia and is crucial for youth’s future career as employers tend to select candidates with volunteer background; volunteers will stand a better chance of getting foreign scholarship than those without a volunteering background.”

In the Volunteering Task Force Joint Statement, Task Force, 2013, the Johns Hopkins Comparative Nonprofit Sector Project (JHCNSP) found that in 36 countries studied, 44 per cent of the workforce of civil society organisations was made up of volunteers, and would be worth $400 billion annually.

If volunteers were a country, JHCNSP estimated “Volunteer Land” would be the ninth-largest in the world. In developed nations, volunteer work represents 2.7 per cent of GDP; in developing nations, it is 0.7 per cent.

Cean Borath, MOEYS secretary of state, said volunteerism is one of the most important parts of a youth’s life, requiring them to participate in every action of this social work so as to develop themselves and help society.

The government has been encouraging youth to get involved in volunteer work in order to help each other for the country’s unity and sustainable development, he added.

Since volunteering benefits not only youth themselves in the form of  skill and network building for their future career, but also the society in which they reside, the government of Cambodia has set volunteerism as one of priority sectors for sustainable development in the country.

Praising Cambodian government’s effort for pushing youth to be involved in volunteering work, Claire Van der Vaeren, the United Nations resident coordinator in Cambodia said the government of Cambodia is working hand in hand with the United Nations Volunteers (UNV) team in recognizing volunteers under the National Youth Action Plan in which volunteerism is set to be one of the priorities.

She added volunteerism plays a key role in the reduction of poverty and sustainable development, thus requiring the meaningful involvement and active participation of, among others, volunteer groups.

Thanks to the importance of volunteerism to sustainable development and poverty reduction, it was recognised as an important means of reaching the Millennium Development Goals (MDGs) by the 2010 UN General Assembly.

Chinese Aid Building Indonesia, But at What Cost?