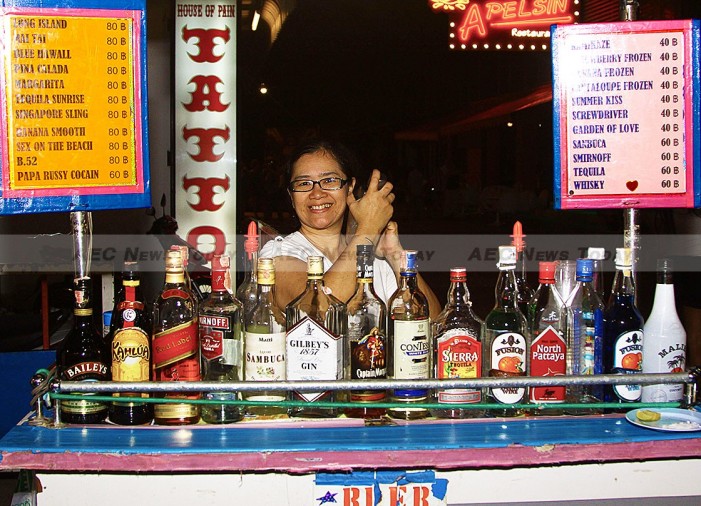 An amendment to Thailand’s Alcohol Control Act threatens to stymie Bangkok’s reputation as an international culinary centre while at the same time adding considerable value to the plethora of beer and go-go bars that give the Thai capital – and several other locations – its character and international adult-nightlife reputation.

Drafted by the National Alcoholic Beverage Commission of Thailand in conjunction with the Thailand Ministry of Public Health (MoPH), the Thailand alcohol law changes ban the selling of alcohol within a 300 metre (328 yard) radius of higher-education institutions.

Endorsed by the government of General Prayut Chan-o-cha on Wednesday, July 22 and published in the Royal Gazette Thursday, the Thailand alcohol law changes become effective immediately, having been passed under the omnipotent powers granted to the Thai prime minister under Section 44 of Thailand’s Interim Constitution.

According to reports the new ban will “not apply to hotels and other service operators established legally under royal decree” new enterprises will be prohibited from August 27. Exactly what constitutes a “service operator established legally under royal decree” has not been defined, but presumed to mean existing licensed premises.

What remains unclear, but feared is the situation where a legally established service operator fails. Will a new proprietor at the same location be able to obtain a new liquor licence?

In a country where the payment of “key money” (a sum of money paid to the property owner or master lease holder on top of the negotiated rental fee before obtaining the key to the premises) is obligatory, the value of a licensed premises will undoubtedly be reflected in the amount demanded for new rental agreements.

It’s also not unreasonable to expect that the suddenly increased value of existing licensed premises will see current tenants face rent increases, resulting in increased food and beverage prices in a city where a ‘really good night out’ can exceed the cost of doing the same in New York, London or Paris.

For the adult-entertainment venues in Pattaya and Phuket the Thailand alcohol law changes suddenly make a liquor-licensed premises a valuable commodity.

Bangkok’s has a well deserved reputation as one of the world’s great culinary centres. Progressive Indian restaurant Gaggan, was voted the best restaurant in Asia by the Diners Club Asia’s 50 Best Restaurants Academy, an influential group of over 300 leaders in the restaurant industry across Asia.

The tradition of being a culinary outpost int he region would appear to be at risk by the Thailand alcohol law changes and it seems that ultimately the number of restaurants will decrease, while the value of existing licensed premises will increase.

When news of the proposed amendments came out earlier this month the Thai Alcohol Beverage Business Association (TABBA) claimed they were ill conceived and put at risk some 125,000 jobs and will cause about Bt115 billion (US$ 3.312 million) damage – about 30 per cent – losses to the industry.

“The declaration’s enforcement would severely affect the service sector, employment levels, related businesses, and society as a whole. Key leisure and tourism areas for Thais and foreigners alike will be hit by the suspension.

“The heavy-handed measure has yet to find international acceptance and could lower the confidence among domestic and international investors alike before culminating in long-lasting socioeconomic damage,” the TABBA said.

TABBA contends that emphasis should be placed on consumption, rather than sales, and the present law requiring ID cards to be shown to prove a customer’s age is a significant barrier for under-age drinking.

The Thailand alcohol law changes come at a time when the Thailand economy is going through a period of considerable distress. Exports are tumbling; a number of electronic firms such as Samsung are closing factories; the Thai currency (the baht) and stock market are in retreat; and a destructive drought is decimating the rural sector, particularly in the Chao Phraya basin – Thailand’s bread basket.

One of the few bright spots has been an increase in foreign tourism number compared to the pre-2014 Thailand coup period when the People’s Democratic Reform Committee (PDRC) laid siege to Bangkok.

Accounting for between 8-10 per cent of Thailand GDP, foreign tourists, in addition to the increasing number of upwardly mobile, urbanised Bangkokians, are accustomed to having a drink with their meals.

The imposition of neo-prohibitionist laws will certainly have a negative impact on Thailand’s hospitality sector, which already has to deal with Thailand’s upside-down alcohol beverage tax system.

Such an alcohol tax system contributes to the high rate of alcoholism in Thailand, especially among the poor who drink the cheap “lao khao” liquor produced from rice.

This creates a vast market for domestically-produced, cheap Thai ‘whiskey’, much of which is of such quality that it fails to meet the import requirements of most international markets.

According to World Health Organization’s (WHOs) Global status report on alcohol and health 2014  high-proof liquor accounts for 72.6 per cent of the total Thai alcohol market while beer accounts for 27 per cent The highly taxed wine sector occupies a lowly 0.4 per cent share.

Putting to rest nonsense claims by some that Thailand alcohol consumption plateaued in 2008 the same WHO study found that in 2010 the average consumption of alcohol in Thailand per each adult 15 years and older was 7.1 litres (1.88 gal) – for alcohol consumers the figure was 30.3 litres (8 gal) of pure alcohol per Thai man and 5.2 litres (1.37 gal) for women) – with the forecast for the end of this year being an average of 8.3 litres (2.19 gal) per person.

That Thailand’s alcohol policies compared to other countries in the region is obvious. Neo-prohibitionist laws such as the 300-metre radius ban will continue the tradition of a failed policy history.

Thailand it would appear has not gotten the message with taxes on local high-proof liquor remaining incredibly low, fuelling the health and social costs.

According to the WHO Thailand received the highest rating of 5 for the number of ‘Years of Life Lost’ due to drinking. According to 2012 data the number of deaths from cirrhosis of the liver in Thailand were 28.2 per 100,000 citizens for men and 8.7 for women.

By comparison the death rate for road accidents using the same criteria was 70.3 for men and 18.5 for women.

In addition to threatening to harm the food and beverage sector and make some property owners richer, the Thailand alcohol law changes are expected to widen the definition of what constitutes an alcoholic beverage to take into account newer generation pre-mixed alcoholic drinks, and impose sales restrictions based on time and location that they ca be sold.

In addition the licensed premises face a five-year ban if caught allowing people under 20-years-old onto their premises, while nighttime entertainment venues that are subject to noise complaints complaints by residents will be given 30 days to remedy the problem or face a five-year licence suspension.