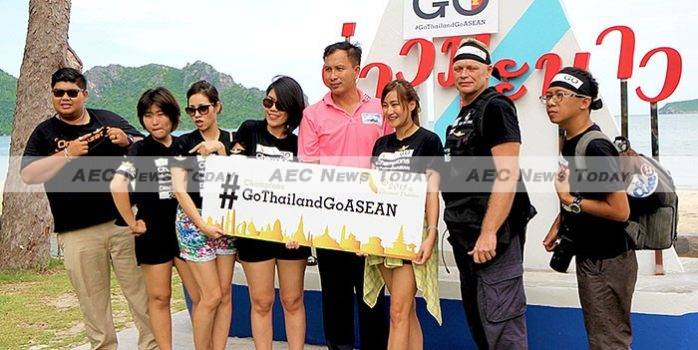 The idea seems simple enough. Gather a small group of social-media savvy journalists from across Asean and get them to illustrate the letters of the association’s acronym through pictures and words in accordance with what the Tourism Authority of Thailand (TAT) have deemed them to mean – Adventure; Spa & Health; Elegant Culture; Amazing Food; Nature & Beach.

The location was the same that qualifying bloggers, videobloggers, writers, photographers, and Asean travellers who had visited Thailand and took part in an earlier public round of the #GoThailandGoAsean social media campaign had been invited to for the same purpose, but for this group the A.S.E.A.N. would be dished up to them.

To add a bit of friendly rivalry between the three media representatives – Poeti Fatima & Anggun Adi from Indonesia’s highly successful shoppingmagz, Pham Thi Huong from the Bangkok bureau of Vietnam News Agency (VNA), and John Le Fevre, Thailand correspondent for the Singapore-based The Establishment Post – were invited to create their own hashtag to see who could generate the most social media buzz during the trip.

The three media representatives were also asked to do a “to camera” piece summing up their experiences in the five A.S.E.A.N. categories (Ed: See our video section for the individual to-camera pieces).

So how did the media go at experiencing and recording the TAT-defined A.S.E.A.N? According to this snappy video put together by the organisers of the trip pretty well.

Starting early – perhaps to early for some – on a Saturday morning and with no prior notice that they were going to be thrown off an 11 metre- (36 foot) high tower, the group were taken to Wing 5 of the Royal Thai Air Force (RTAF) in Ko Lak sub-district where they were initiated into the world of parachuting.

Met on arrival by some very serious looking Warrant Officers from the unit’s Strike Force, the group were given a brief chance to take the scene in before being strapped into parachute harnesses and helmets and led to the launching ramp.

After another brief gesture-based demonstration each individually inched their way to the precipice where they launched themselves into space – often with a little help from the strategically placed knee of one of the constantly smiling and laughing loadmasters.

With the adrenaline still pumping they were then taken off for some archery practice and an outdoor beach-side lunch, before being presented with their parachutist ‘wings’ by the deputy commander of Wing 5, Group Captain Anirut Rattaporn.

Located so close to Bangkok the city of Hua Hin has grown increasingly popular with both international visitors and Bangkok residents wishing to escape the daily grind.

Spa and health services have sprung up throughout the city with many staffed by graduates from Bangkok’s Wat Phra Chetuphon (Temple of the Reclining Buddha), or Wat Pho as it is most commonly referred to, regarded as the best massage school in Thailand.

While considerably more expensive than massage centres where the staff have (perhaps) trained at other establishments, the more up market health centres offer a range of treatments from simple massages though to luxurious full body herbal treatments aimed at rejuvenating aching muscles and tired skin cells. .

Established in 1964 by Thailand’s current king and queen to improve the livelihood of fishermen who could not earn an income during the annual rainy season, the Khao Tao Professional Handicraft Centre continues the tradition of producing high quality 100 per cent pure woven cotton fabrics.

Sitting on giant traditional northern Thailand weaving looms known as kee kratook, the distinctive clackety-clack of the looms at work and the level of manual tinkering and adjustment required to obtain each perfect row harkens back to earlier periods of Thailand’s history.

While more complex weaves make it difficult to get into a smooth rhythm such is not the case for simpler styles and once everything is set up the weavers are able to establish a smooth tempo, with the clackety-clacking of the looms taking on an almost musical sound.

A little outside of Hua Hin on the coast road to Pranburiis is what is commonly referred to as ‘Seven Kings Park’.

Eventually destined to see a museum and an exhibition centre developed on the site at a total cost of Bt700 million (US$ 19.7 million), the towering bronze statues were crafted by Thai foundries in six provinces .

Situated on the Gulf of Thailand Hua Hin receives a seemingly endless range of fresh seafood which is on display each night packed in ice at the entrance to the numerous seafood restaurants situated along the waterfront.

Monster-sized king prawns (shrimp), squid, slipper and rock lobsters, plus a vast array of fish species and molluscs are readily available at just a fraction of prices in developed overseas countries.

To sample a range of traditional and more modern Thai dishes the ‘fam trip’ group were taken to Hua Hin’s Market Village shopping mall where they not only got to taste the range of snacks and meals on offer, but also try their hand at prepare preparing them. The final step saw the group eating what their fellow ‘fam trip’ members had prepared.

A little out of Hua Hin on the Petchkasem road is the YouYen Garden. Set around lush green lawns and with stairs leading down to white-sand beaches, the restaurant has quickly developed a reputation for serving up delicious Thai and western dishes, in an an environment unique to most others.

Hua Hin’s beaches are highly regarded by frequent visitors due to their cleanliness and natural state.

With the Asean Economic Community (AEC) less than two months away the TAT see’s tourists from Asean member states as increasingly important in countering the falling visitor numbers from other traditional sources.

According to figures from Thailand’s Tourism Ministry visitors from Russia, which totalled 1.119 million in the first nine months of 2014 were 48.25 per cent below the same period for this year, those from Asean increased 26.59 per cent to account for 26.25 per cent of the total 17.323 million inbound tourists Thailand welcomed over the period second only to those from China who represented 27.63 per cent, a YoY increase of 95.55 per cent.

Asked about the significance of the coming AEC, TATs deputy governor for International Marketing (Europe, Africa, Middle East and America), Juthaporn Rerngronasa, said the “TAT expects that intra-ASEAN travel will be one of the primary beneficiaries of the Asean community”.

In the meantime take in some of the journalists antics and some of the A.S.E.A.N activities to be found in Hua Hin, Prachuap Khiri Khan Province when you #GoThailandGoAsean.