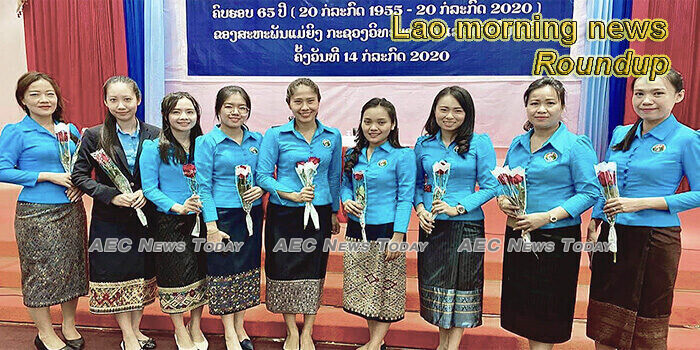 Champassak strictly prevents second wave of Covid-19
The Champassak Province is taking preventive measures against Covid-19 including keeping a close eye on returning migrant workers from neighbouring countries to prevent the second wave of the disease in the country.
— KPL

Will Laos be home to a unicorn some day?
Make no mistake, the secret is out. The tech market potential in Southeast Asia (SEA) has been realised and the region is now the global hotbed for tech startups. Renowned global investors are chomping to enter the market and the digital payments sector in Indonesia is a testament to that.
— E27

KOICA, FAO Sign Agreement to Support Livelihoods and Climate-Resilient Agriculture in Attapeu
Korea International Cooperation Agency (KOICA) and the Food and Agriculture Organization of the United Nations (FAO), signed an agreement on Jul 23 to collaborate in supporting the “Integrated Programme for Climate Resilience and Empowerment in Attapeu Province.
— KPL

AFD, EU pursue efforts to preserve biodiversity in Laos
Leo Faber, Ambassador of the European Union to the Lao PDR and Matthieu Bommier, Director of the Agence Française de Développement (AFD) in Laos, together with the attendance of the French Ambassador to the Lao PDR, Florence Jeanblanc-Risler signed in Vientiane on Jul 17 an agreement to finance a project implemented by the Wildlife Conservation Society (WCS).
— KPL

Laos-Timor-Leste mutual support continues to prosper
Mutual support between Laos and Timor-Leste has been reconfirmed with the new diplomatic representative of the young state in Southeast Asia taking up her mission in Laos.
— Vientiane Times

Survivors of Laos’ Worst Dam Disaster Still Struggling Two Years Later
Two years after a dam collapse that caused Laos’ worst flooding in decades, many of the thousands of rural villagers who lost their homes and land in the disaster say they are still struggling to recover with inadequate support from the dam’s developers and the Lao government.
— RFA

Savannakhet steps up fight against drugs
Savannakhet is determined to bolster efforts to fight illicit drug trafficking and has confiscated over 20,000 grams of amphetamine since last year.
— Vientiane Times (paywall)