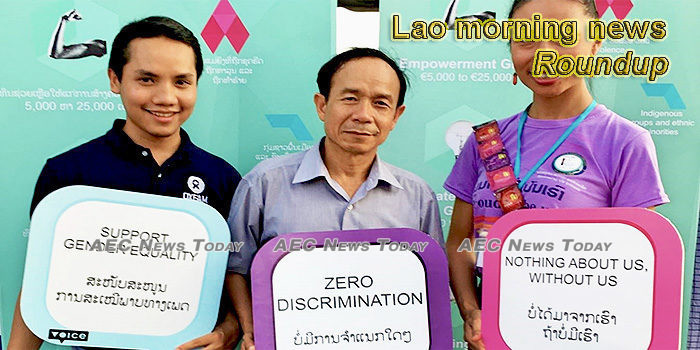 MLC Ministers Reaffirm Further Enhancing Regional Connectivity
The Mekong-Lancang Countries Ministers have reaffirmed the need for further enhancing regional connectivity through jointly promote the MLC Economic Development Belt and to explore the possibility in synergizing the MLC Plan of Action on Connectivity with the Belt and Road Initiative (BRI).
— KPL

Development partners need to promote Laos’ agro-biodiversity; FAO’s D.G.,
Director General of Food and Agriculture Organisation Qu Dongyu has said that it is important to encourage all partners to promote and invest in the Lao PDR’s agro-biodiversity, and continue to focus on balancing commercial development and national food security.
— KPL

90th anniversary of Party marked in Laos
A ceremony was held in the Lao capital of Vientiane on February 22 to celebrate the 90th founding anniversary of the Communist Party of Vietnam (CPV), with the participation of hundreds of party members who are currently working in Laos.
— Nhan Dan

Lao FM says China’s economy can recover quickly after outbreak
Laos highly appreciates China’s great efforts in the combat against the COVID-19 outbreak and will stand side by side with China fighting the epidemic, said Lao Foreign Minister Saleumxay Kommasith during an interview with CCTV.
— CGTN

Mekong nations, China push for more trade, investment, connectivity
The six Mekong-Lancang Cooperation (MLC) countries agreed on the need to elevate their cooperation from rapid-expansion to a comprehensive stage as their foreign ministers met in Vientiane on Thursday.
— ANN/Vientiane Times

Govt, Chinese developer sign PDA for 1,200 MW Floating Solar Power Project
To support its efforts to achieve green growth and alternative and clean energy development in Laos, the government is partnering with a Chinese company on a solar power project.
— ANN/Vientiane Times

FEATURE: Xayaboury’s elephants draw jumbo crowd at annual festival
If you’re lucky enough to be in Laos this week or next, don’t miss this opportunity to meet Xayaboury province’s domesticated elephants.
— ANN/Vientiane Times