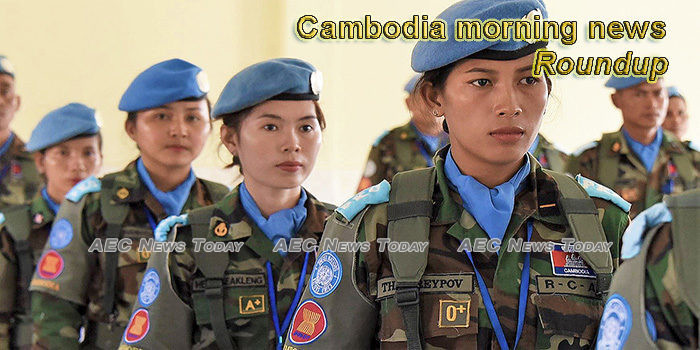 Government to Hand Out Cash Subsidies to Low Income Families
Cambodia’s government has today (May 26) announced it will provide support for poor and needy families across the country, particularly those who have been affected by the Coronavirus Disease 2019 (COVID-19) pandemic.
— Cambodianess

Inbound air passengers must undergo quarantine
Health Minister Mam Bun Heng said yesterday that from now on Cambodia will be enforcing a strict mandatory 14-day quarantine for all passengers flying into the Kingdom.
— Khmer Times

Additional Measures to Assist Virus-Hit Private Sector and Restore Economy
The Royal Government of Cambodia has announced additional measures to assist COVID-19-affected private sector and factory workers and to restore the economy after the crisis.
— AKP

Five jailed a year each for kidnap and extortion
Phnom Penh Municipal Court today convicted and sentenced five Chinese men to one year in prison each for wrongfully confining a countryman over a $26,000 debt.
— Khmer Times

The China Jackpot
How Chinese gamblers turned a Cambodian casino called NagaWorld into an international juggernaut.
— The Wire China

Malaysian Kidnappers Arrested In Siem Reap
According to reports, around 16.15 on May 25 2020, along National Road 6, four suspects were arrested for questioning over illegal detention and confinement of a man between March 20 and May 25, 2020 at the villa rental villa in Svay Dangkum town / Siem Reap Province.
— CNE

Suspended workers get unemployment
The Ministry of Labour and Vocational Training has announced allowance payments for more than 33,000 suspended workers from the garment and tourism sectors.
— The Phnom Penh Post

Yunnan, Cambodia help each other in COVID-19 response
China and Cambodia have conducted mutual assistance in the COVID-19 epidemic control and prevention.
— Yunnan

Cambodia: the construction site goes with the eight Zoomlion’s T6013-8A tower cranes
Construction work has already begun on the PH Eco Mall project which combines a shopping mall and private residences near the Mekong River and National Road 1 in Phnom Penh, Cambodia. Eight tower cranes produced by Zoomlion have been used in this large-scale project.
— Heavy Quip

Cambodia strives to become more self-reliant with regard to vegetables
A senior official at the Ministry of Agriculture has called on more investment in the horticulture and subsidiary crops sector because the demand for vegetables in the country has increased nearly 1,000 tonnes per day.
— Fresh Plaza

Cambodia: High hopes for international export of Pailin longan
Cambodia expects that the longan exports from Pailin province to the international market, especially direct exports to China, to pick up once the once the Covid-19 outbreak tapers.
— Fresh Plaza

Capital calls for Covid-19 caution
The Phnom Penh Municipal Hall announced on Monday that authorities in the city’s 14 districts must encourage people to continue various safety measures to prevent a second wave of Covid-19.
— The Phnom Penh Post

Vehicle taxes to be collected from June
The Ministry of Economy and Finance will start collecting vehicle taxes for this year from June 1 and will accept payments until November 30.
— The Phnom Penh Post

Vietnamese Rubber Company Destroyed Indigenous Community Land
Indigenous communities in Ratanakiri province on May 25 called on the government to intervene in a land dispute between their villages and Vietnamese rubber company Hoang Anh Gia Lai (HAGL) as the company has failed to return land to the community as agreed.
— Cambodianess

Gov’t rolls out stimulus to keep businesses afloat
The government has introduced the fourth round of stimulus measures aimed at ensuring economic and social stability during the outbreak of the Covid-19 disease.
— The Phnom Penh Post

APSARA Authority to re-open its three museums in June
The three museums under the management of the APSARA National Authority will reopen their doors for the national and international visitors from June onward, after being closed for a while due to the COVID-19 pandemic.
— Khmer Times

ARDB set to hand SMEs $20M
The state-owned Agricultural and Rural Development Bank (ARDB) will soon disburse $20 million in special credit as part of the $50 million they released in March in loans to small and medium-sized enterprises (SMEs) in the agricultural sector.
— The Phnom Penh Post

Thirteen Journalists Arrested in Cockfighting Crackdown
At least 13 journalists have been arrested by authorities during a crackdown on a cockfight gambling site on the outskirts of Phnom Penh.
— Cambodianess

E-cigarette back in spotlight amid virus pandemic
The Ministry of Health’s Department of Communicable Disease (DCD) department has released a video about the effects of smoking, while the NGO Cambodia Movement for Health (CMH) warned against the use of electronic cigarettes or vape.
— The Phnom Penh Post

Rain Continues Across Cambodia in Last Week of May
Rain would continue throughout Cambodia in the last week of May, thus gradually decreasing the temperature, according to the new forecast shared by the Ministry of Water Resources and Meteorology this morning.
— AKP

City threatens tough action against rubbish scofflaws
The Phnom Penh Municipal Hall warned on Monday it will act against businesses and residents who fail to pay for rubbish removal.
— The Phnom Penh Post

Old Man Slingshots Wife In Eye
An elderly man was arrested by police after getting drunken and arguing with his wife, then shooting her in the eye with a slingshot, causing serious injuries.
— CNE

Man held for violating daughter and niece
Kandal Anti-Human Trafficking and Juvenile Protection Department officers sent a man to the provincial court on Tuesday after arresting him the day before for allegedly molesting his daughter and niece in Sa’ang district.
— The Phnom Penh Post

Por Sen Chey woman murdered
Por Sen Chey district police are searching for a suspect who robbed and killed a woman in a rented room in Samraong Kraom commune in Phnom Penh at 6:30pm on Monday.
— The Phnom Penh Post