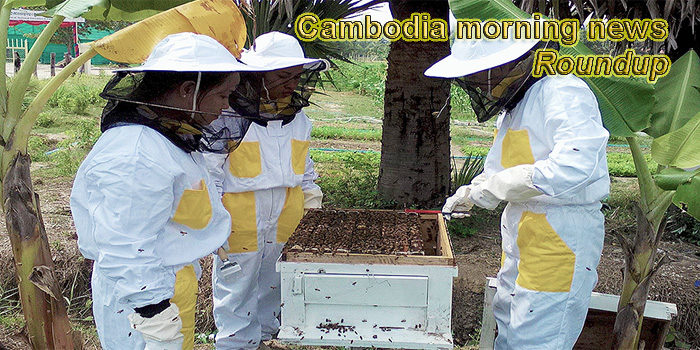 New Case Of COVID-19 Confirmed
The Ministry of Health has announced a new case of COVID-19 in Kompong Trach district, Kampot province.
— CNE

Migrants caught trying to illegally cross Thai border
Thai soldiers on the Cambodia-Thai border detained 82 Cambodians on Wednesday morning while they were trying to illegally enter Thailand at small border checkpoints in Banteay Meanchey province, and Aranh, in Thailand.
— The Phnom Penh Post

THREATS AGAINST CAMBODIAN FOREST DEFENDERS ESCALATE AMID COVID-19
It takes particularly cynical government officials to use the world’s focus on tackling COVID-19 to accelerate illegal logging of protected forests; simultaneously lining the pockets of business elites, attacking environmental activists, and sabotaging its own ability to fight the climate emergency. Yet this is exactly what some in Cambodia appear to be doing.
— Global Witness

Cambodia: Agricultural experts form collective to assist local exports
A group of agricultural experts have joined forces to form the Cambodia Horticulture Investment Platform (CHIP), intent on the “promotion of fruits and vegetables in the Kingdom”.
— Fresh Plaza

237 Factories Suspend Operations
As of May 21, a total of 237 factories have suspended operations, according to Heng Sour, secretary of state for the Ministry of Labor and Vocational Training. More than 110,000 workers around the country have been affected.
— CNE

Anti-virus measures in place after travel ban lifted
The government yesterday announced the lifting of the entry ban on people from six countries, more than two months after it was put in place to prevent imported virus cases from entering Cambodia.
— Khmer Times

Cambodian Senior Official: 13th ASEM Summit to Continue as Planned
The 13th Asia-Europe Summit (ASEM13) will continue to be held in Cambodia as scheduled, said H.E. Luy David, Secretary of State for Foreign Affairs and International Cooperation and Head of the ASEM13 National Secretariat.
— AKP

Convicted Police Officer Now NGO Worker
A former Australian police officer, who was extradited from Cambodia in 2007 to face allegations of corruption in Australia, is back in Phnom Penh and working with the Child Protection Unit (CPU) of a local NGO, according to the organization’s executive director.
— Cambodia Daily

ID law in works for Cambodian citizens
Officials from the ministries of Interior, and Justice, met with working group members and legal experts on Wednesday to review and discuss a draft law concerning identification methods in the country.
— The Phnom Penh Post

Cambodian conservationists hopeful for revival of rare royal turtle
Conservationists in Cambodia are celebrating the hatching of more critically endangered turtles in recent months than the past three years combined, owing to a preservation drive and a halt on sand-dredging.
— Reuters

Kingdom’s bicycle exports pedal past virus
While bicycle industries around the world rust during the ongoing coronavirus pandemic, the Kingdom’s locally-assembled ones continue to pedal into the international market in higher numbers.
— The Phnom Penh Post

New Measures to Ease Burden on Electricity Bill Payment Taken
Business bases in the sectors of industry, agriculture, trade, and services are given a favour on electricity bills aiming to ease their burden amid the COVID-19 crisis.
— AKP

Australia appreciates Cambodia’s Success in Fighting against COVID-19
Australia has expressed its congratulations to the Royal Government of Cambodia on its success in combating the COVID-19 pandemic.
— AKP

Bar association builds room for lawyer, client consultation
The Bar Association of the Kingdom of Cambodia (BAKC) has set up a legal office in all 25 municipal-provincial prisons to make it easier to maintain confidentiality between lawyers and clients in preparation for court proceedings.
— The Phnom Penh Post

Domestic Pig Farming Boosted
Domestic pig farming has been promoted to supply the local market as the quantity of pigs imported from neighbouring countries has been ordered to be checked strictly.
— AKP

Chisor Mt temple site under repairs
A group of technical workers from the Takeo provincial Department of Culture and Fine Arts are repairing the 11th-century Chisor Mountain historical temple.
— The Phnom Penh Post

The Highway between Phnom Penh and Kampot Town May Be Completed earlier than Planned
The expansion and upgrade of National Road 3 may end up being completed well ahead of schedule.
— Cambodianess

Supreme Court upholds woman’s conviction for trafficking deaf HIV-positive teen
The Supreme Court today ruled to uphold the conviction of a woman to 15 years in prison for taking a deaf and HIV-positive underage girl from the orphanage she was staying in and forcing her to have sex with an elderly man at a brothel in the capital in 2013.
— Khmer Times

Vehicle drivers fined $126K for excessive cargo
Ministry of Public Works and Transport authorities detained 298 vehicles for being over the weight limit and fined their drivers over 505 million riel ($126,250) in April.
— The Phnom Penh Post

Korean Jailed For Fraud
A Korean man arrested by the Royal Gendarmerie of Phnom Penh Municipal Court yesterday was sent to jail on the afternoon of May 20, 2020, on charges of fraud.
— CNE

Officials accused of permitting land sale
Residents and civil society organisations on Thursday filed a joint complaint with the Mondulkiri Provincial Court against Pech Chreada district officials, including village and commune chiefs and the governor, for permitting the sale of community forest land.
— The Phnom Penh Post

Eight men and woman charged over kidnap for ransom
Phnom Penh Municipal Court today charged and jailed eight Chinese men and a Myanmar woman who allegedly confined a Chinese businessman and demanded $50,000 from his wife in exchange for his release.
— Khmer Times

One dead, four hurt in crash
One person died and four others suffered injuries after two vehicles crashed along National Road 6 in Chrouk commune, Pouk district, Siem Reap province. The accident caused the drivers to lose control of their vehicles and crash into two nearby houses.
— The Phnom Penh Post

Khmer Rouge Soldier Recounts SS Mayaguez Battle on 45th Anniversary
Around 45 years ago, Mao Ran found himself in a boat headed to Koh Tang island. This was the first time the Khmer Rouge soldier had seen the Cambodian coastline or the Gulf of Thailand.
— VOA Khmer