Cambodia morning news for May 13 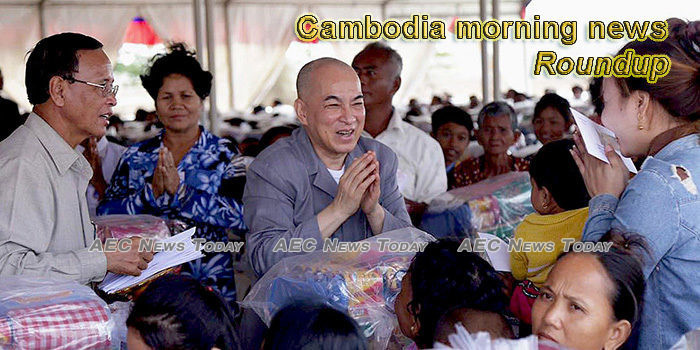 Young Woman Becomes 16th Targeted in Brutal Assaults on Cambodia Opposition Since Mid-2019
A young woman activist with the banned Cambodia National Rescue Party (CNRP) has been attacked by an unknown assailant, bringing to 16 the number targeted since mid-2019 and prompting condemnation from the opposition Tuesday over what they allege is a campaign of intimidation by authorities.
— RFA

COVID-19 hurts Cambodia’s export of famous Kampot pepper
The exports of renowned Kampot pepper, one of Cambodia’s only two products to be registered as a Geographical Indication in the European Union (EU), have now been stymied because of the COVID-19 pandemic, local media reported on Monday.
— Cambodianess

French Embassy in Cambodia looks to arrange repatriation flight
The French Embassy in Cambodia, in a post on its website said it is currently contacting all the people who had informed the embassy that they were looking for a repatriation solution to France, and who, according to our information, are still at Cambodia, in order to have a precise estimate of the number of French people passing through still stranded in Cambodia.
— Khmer Times

Loans in Kingdom soaring
Credit Bureau Cambodia (CBC) has reported that the total outstanding loans in the first quarter of the year reached about $28.4 billion, up to 26 percent compared with the same period last year.
— Khmer Times

Cambodia Reports One New Recovery; Total Case 122; Total Recovery 121
Cambodia reported no new case of Covid-19 on Tuesday, while one more patient recovered, according to the Ministry of Health’s press release dated 12 May 2020.
— Fresh News

Sihanoukville Sewer Work Uncovers UXO Shells
CMAC officials have completed the search and retrieval of old artillery shells buried at the site of a new sewage drain near the Total Oil Station in Sangkat 3, Sihanoukville.
— CNE

CATU urge factory to reinstate fired union members
The Cambodian Alliance of Trade Unions today called on the Ministry of Labour to intervene in the reinstatement of three of its union activists who were previously fired by the Roo Hsing Garment Co Ltd.
— Khmer Times

Diplomats stream to visit Sokha
After meeting with Prime Minister Hun Sen last week, former opposition leader Kem Sokha has been receiving visits and messages from ambassadors from Western countries over the past two days.
— The Phnom Penh Post

Regular air travel not lifting off
The Kingdom’s airline operator said that local travelling by air will take at least one year to recover after the pandemic ends, according to the chairman of Cambodia Angkor Air.
— Khmer Times

Government analyses poor, aims to offer financial aid
Minister of Planning Chhay Than has told all city and provincial governors to closely monitor the process of identifying poor families to help ensure they can receive financial assistance during the Covid-19 pandemic.
— The Phnom Penh Post

Mondulkiri tourism plan to go forward
Minister of Tourism Thong Khon announced the formation of an inter-ministerial committee to create a plan for tourism in Mondulkiri province, where 39 tourist destinations have been identified by the provincial governor Svay Sam Eang.
— The Phnom Penh Post

Tourism Ministry Seeks to Improve Hygiene as Sector Reels from COVID-19 Pandemic
Cambodia’s Ministry of Tourism on Monday urged all hotel and accommodation owners to be ready to improve their service quality to attract more tourism when the Coronavirus Disease 2019 (COVID-19) pandemic comes to an end.
— Cambodianess

Kampot Pepper Yields Increase to 130 Tonnes
Kampot pepper yields have seen a high record of 130 tonnes this year, thanks to favorable weather conditions, according to figures from Kampot Provincial Agriculture Department.
— AKP

Repair of Red Temple nearing completion
The director of the Apsara National Authority’s (ANA) department of conservation outside Angkor Archaeological Park Chhean Rotha said on Tuesday that his team has completed 80 per cent of the planned restoration of Kraham Temple.
— The Phnom Penh Post

Sar Kheng warns K Chhnang top police officials to buck up
Minister of Interior Sar Kheng issued five disciplinary letters dated March 26 to the Kampong Thom provincial police chief, deputy police chiefs and officers under their command for showing a lack of leadership and failing to carry out their duties, it was revealed on Tuesday.
— The Phnom Penh Post

Trade with Japan sees increase of nearly 5%
Trade volume between Cambodia and Japan reached over $586 million in the first quarter of this year, up 4.90 per cent year-on-year, despite the Covid-19-fuelled demand and supply shocks reverberating across the global economy, a report from the Japan External Trade Organisation (Jetro) shows.
— The Phnom Penh Post

Green Hero Transforming Waste into Compost
With humble start, a joint private firm between Cambodia and Singapore is gradually expanding its activity to transform Phnom Penh’s garbage into organic fertilizer, as waste management remains a concern particularly for the capital.
— AKP

COVID-19 committee tackles reopening of sectors for economic relief
The National Committee for Combatting COVID-19 today discussed easing coronavirus restrictions and reopening businesses in priority sectors in a bid to boost the national economy, which has been battered by the pandemic.
— Khmer Times

Central Lowland Areas to Experience Possible Lightning and Gusts This Week
Central lowland areas of Cambodia would face thunder, lightning, and gusts this week, according to the new forecast shared by the Ministry of Water Resources and Meteorology.
— AKP

Potential EU ‘blacklisting’ most dangerous threat to local economy
A recent article by Reuters news agency claiming Cambodia is being placed on the European Commission’s money laundering blacklist in October is “very dangerous” economically and could have a possible “knock-on effect” to other international agencies, according to an industry insider.
— Khmer Times

Chinese Man Found Dead Outside S’ville Hotel
On the morning of May 12, 2020, in Village 1, Sangkat 3, Sihanoukville, a Chinese man was found dead outside the “Ocean Hotel”.
— CNE

Soldier shot dead during a shoot-out with police
Police in Oddar Meanchey province today shot dead a soldier following an exchange of gunfire when he tried to resist arrest over the murder of his wife and another woman.
— Khmer Times

Chinese Man Killed In Kampot Warehouse Collapse
According to preliminary reports, a cement warehouse collapsed, causing the death of a Chinese man. Others have been reported injured (*appears to be 3 Chinese and a Cambodian).
— CNE