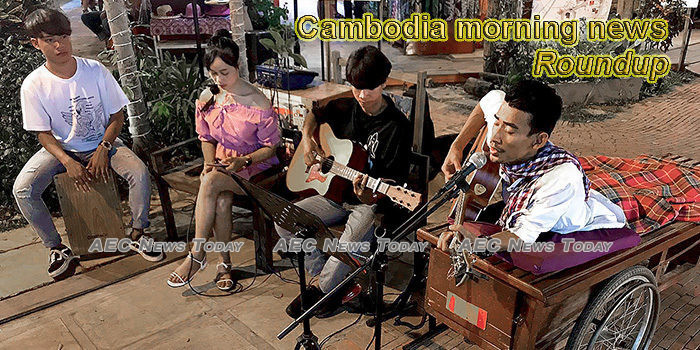 Court Questions Kem Sokha’s Decision to Form CNRP with “Violent” Sam Rainsy
The council of judges on Wednesday afternoon proceeded to question Kem Sokha about his stated adherence to nonviolence and attempted to impeach his character by associating him with the “violent policies” of exiled opposition leader Sam Rainsy.
— VOA Khmer

CAMBODIA ENERGY CHIEFS TIED TO U.S. PROPERTY WORTH $5 MILLION
A father and son have pulled the strings in Cambodia’s energy policy for the past two decades, and during that time their family have acquired several million dollars’ worth of real estate and farmland in the U.S. states of Florida and Georgia.
— RFA

Ex-governor denies mistress’ murder
In the Appeal Court on Wednesday, Lay Vannak, the former Takeo provincial governor and his brother, Lay Narith, who is a former deputy provincial police chief, on Wednesday denied involvement in the death of Vannak’s mistress Chev Sovathana.
— The Phnom Penh Post

Future of international events uncertain amid COVID-19 fears
Prime Minister Hun Sen’s trip to Cuba to celebrate 60 years of diplomatic ties with the Kingdom has reportedly been cancelled amid a global COVID-19 outbreak.
— Khmer Times

COVID-19-Infected British Lady’s Health Is Stable
The health condition of the 65-year-old British woman who was diagnosed yesterday with COVID-19 is stable, Spokesperson of the Ministry of Health Dr. Ly Sovann told AKP this afternoon.
— AKP

Battambang River Festival to go ahead despite COVID-19 fears in Kingdom
The River Festival in Battambang province will be held as scheduled despite fears over COVID-19 with the discovery of a Cambodian victim in Siem Reap province.
— Khmer Times

Ministry refutes justice ranking
The Ministry of Justice on Wednesday refuted a World Justice Project (WJP) report which ranked Cambodia 127th out of 128 countries globally, in its rule of law performance, saying the report did not reflect realities in Cambodia.
— The Phnom Penh Post

GMAC sends team to seaport to assess fabric requirements
The Garment Manufacturers Association in Cambodia (GMAC) is now studying the supply of raw materials in the Kingdom to assess how much more fabric is needed to meet factories’ demand, according to a representative of the organisation.
— The Phnom Penh Post

Loan Repayment Suspension of Garment Workers Get the Nod
Garment workers whose jobs suspended due to raw material shortages are now allowed to delay their loan repayments to the commercial banks and microfinancial institutions (MFIs).
— AKP

Ancient hospital restored by ANA
The Apsara National Authority (ANA) said the second phase of restoration is underway at Prasat Tonle Sgnuot – the ancient hospital built during the reign of King Jayavarman VII in the late 12th century and early 13th century.
— The Phnom Penh Post

PM: Fear of COVID-19 should translate to fear of death by traffic accident
If only people are fearful of traffic accidents like Covid-19, the death toll will reduce.
— Khmer Times

SSCA asks China for Covid-19 information
Minister in charge of the State Secretariat of Civil Aviation (SSCA) Mao Havanall said on Wednesday that China will share its experience of Covid-19 to stop its spread in Cambodia.
— The Phnom Penh Post

Ministry asks students to debate on environment
Minister of Environment Say Sam Al suggested that partners from universities organise debates on environmental topics to encourage and broaden the understanding as to why it is important to reduce plastic use.
— The Phnom Penh Post

Chamkarmon governor: Flooding risks are not trash talk
At least 100 tons of rubbish was extracted from the Boeung Trabek canal after Chamkarmon district authorities initiated a rubbish removal campaign last week to decrease flooding risks before the arrival of the rainy season.
— The Phnom Penh Post

Villagers save vital wetlands from land grab
The Kampong Cham provincial Department of Agriculture, Forestry and Fisheries is looking for the owner of a tractor involved in clearing wetlands at Cholkiri district’s Peam Chhkork commune, to send him to court for legal action.
— The Phnom Penh Post