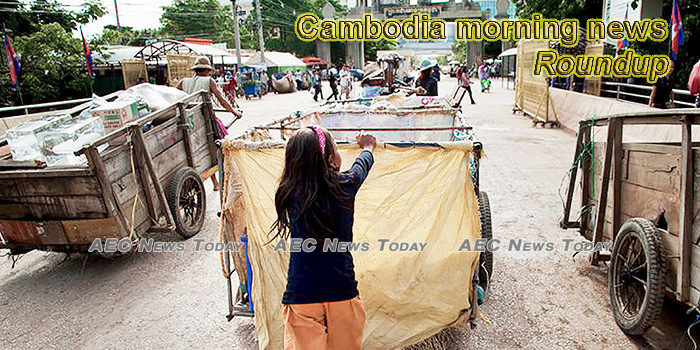 Teacher transfers suspended
The Ministry of Education, Youth and Sport has ordered all education departments in the country to suspend teacher transfers for the rest of the year. The decision was made to help solve a shortage at public educational institutions.
— The Phnom Penh Post

UNHCR SAYS NO COMMENT ON ACTIVIST’S ABDUCTION
The Bangkok chapter of the United Nations’ agency on refugee rights on Monday declined to comment on the alleged abduction of a Thai asylum seeker in Cambodia.
— Khaosod English

Embassy of France looks to arrange up to two repatriation flights this June
The French Embassy in Cambodia is facilitating its citizens and those from UK, Norway, Iceland, Switzerland, Liechtenstein and opportunity to fly to Europe via Frankfurt, Germany. The flights were originally scheduled to arrive in Amsterdam.
— Khmer Times

Chinese On Chinese Kidnap Sparks Successful Police Operation
On the afternoon of 8 June 2020, an investigation into the torture, extortion and money laundering crimes inflicted by Chinese on Chinese from June 5, 2020 at 11 am, led to a total of four suspects arrested and victims rescued, according to the Preah Sihanouk Provincial Police Commissioner.
— CNE

Chili exports from Cambodia are truly hot
Cambodia’s Agriculture Ministry reported that the nation exported more than 30,000 tonnes of fresh chilis during the past five months of the year to Thailand.
— Fresh Plaza

Referral hospital built to improve maternal and child mortality rates in Preah Vihear
Minister of health Mam Bun Heng said that the government will continue to develop its health infrastructure in rural areas in order to provide effective health services across the Kingdom.
— Khmer Times

Childcare services set to resume
The Ministry of Social Affairs, Veterans and Youth Rehabilitation will allow associations and local and international NGOs to resume the provision of childcare services after it was suspended since April to prevent the spread of Covid-19.
— The Phnom Penh Post

Cambodian NA President Satisfied with Cambodia-Timor-Leste Relationship
Samdech Akka Moha Ponhea Chakrei Heng Samrin, President of the National Assembly (NA) has expressed his satisfaction with the good diplomatic relations between Cambodia and Timor-Leste and the cooperation between the two governments.
— AKP

Campaign to clear backlog set for next phase
Ministry of Justice spokesman Chin Malin said on Monday that the committee in charge of clearing the backlog of court cases in the Phnom Penh Municipal Court and the provincial courts has been reviewing the results of its one-month campaign before its second phase is implemented next week.
— The Phnom Penh Post

Local leaders learning how to help victims of violence
The Ministry of Women’s Affairs has been training regional head advisers on basic counselling for women and children who have been victimised by violence.
— The Phnom Penh Post

Kingdom-US trade strong in first four months, but expected to taper off
Two-way trade between Cambodia and the US in the first four months of the year increased 29.31 per cent to $2.1 billion compared with $1.65 during the same period last year, US Census Bureau data show.
— The Phnom Penh Post

Five Days on, Cambodian Interior Ministry and Thai Embassy Have ‘No Information’ on Missing Activist
The Cambodian Interior Ministry and Thai Embassy in Phnom Penh said they had no information related to the disappearance of a Thai pro-democracy activist, despite several international rights groups and news organizations reporting the incident that occurred on June 4.
— VOA Khmer

Kingdom’s exports of corn decline as local demand rises
The Ministry of Agriculture, Forestry and Fisheries has announced that exports of corn used for livestock feed have declined sharply over the last few years, while production and domestic demand have risen.
— The Phnom Penh Post

Cambodia Reports Zero Case of Covid-19 Today; One Recovered
Cambodia reported zero case of Covid-19 on Monday, while one patient has recovered, according to the Ministry of Health’s press release dated 8 June 2020 (updated as of 8 a.m).
— Fresh News

Kampot residents plead to stay on land
A group made up of more than 30 people from 13 families gathered in Meanrith commune, in Dang Tong district, Kampot province, on Sunday requesting the authorities to speed up the resolution of a chronic land dispute with former Dang Tong district deputy governor Prak Buoy.
— The Phnom Penh Post

Op-Ed: Cambodia’s Diplomacy in a Competitive World
In an impromptu comment to a group of diplomatic trainees last week at the National Institute of Diplomacy and International Relations, Cambodia’s Deputy Prime Minister Prak Sokhonn, Minister of Foreign Affairs and International Cooperation, told them, “Protecting the country’s interests are among the top priority of every Cambodian diplomat”.
— AKP

‘Stop grabbing forest land’
The Siem Reap provincial Department of Agriculture, Forestry and Fisheries called on citizens to stop stealing forest land belonging to the state. It said village, commune and district authorities should cooperate to protect forest land in the province.
— The Phnom Penh Post

Two foreigners get life for drug trafficking
Phnom Penh Municipal Court on Friday convicted two Colombian men to life in prison for importing 20 kilogrammes of cocaine from Brazil to Cambodia via a courier company, in 2017.
— Khmer Times

Four held, over 100kg of drugs seized in capital
During an operation last week in Phnom Penh, the Anti-Drug Department arrested four Chinese nationals and seized more than 100kg of drugs.
— The Phnom Penh Post

Former NGO chief denies abuse claims
The former executive director of international NGO Sovann Komar LLC has denied allegations of serious child abuse and fraud while working for the NGO, which runs a children’s village for over 50 teenagers.
— The Phnom Penh Post