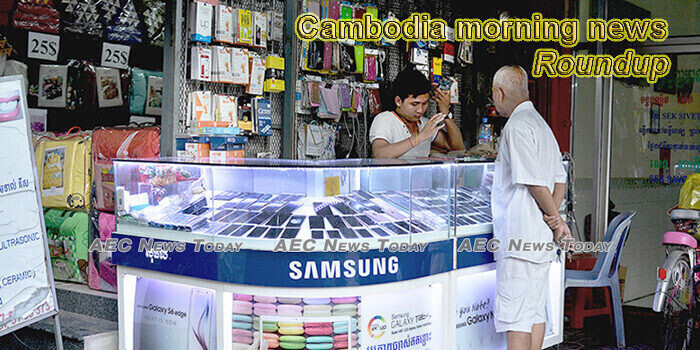 New Angkor Wat Pricing For Expats & Long Term Tourists
A new pricing structure has been made for foreigners visiting the Angkor temple complex. from $ 100 to $ 200.
— CNE

Thai, Lao borders stay shut despite calls for reopening
Thailand and Laos borders will remain closed to the Kingdom. The decision comes following talks with the countries’ officials regarding the reopening of borders to stimulate trade after months of stagnation due to the pandemic.
— Khmer Times

COVID-19 begins to exact toll on Cambodian farming
While Cambodia has been less affected by the health impacts of COVID-19, there are fears that smallholder farms will be hit hard during the wet season that runs from June to September as the fallout from restrictions and lockdown measures takes hold.
— Medical Xpress

Cambodia Reports Zero Case of Covid-19 Today; One Recovered
Cambodia reported zero new case of Covid-19 on Wednesday, while one patient has recovered, according to the Ministry of Health’s press release dated 24 June 2020 (updated as of 9 a.m).
— Fresh News

Schools To Remain Closed Until End Of 2020
Cambodia’s Ministry of Education, Youth and Sport will delay school openings and high school graduation examinations until the end of the year to prevent a second wave of COVID-19.
— CNE

Cambodia, from a Food Insecurity to a Rice-exporting Kingdom: PM Hun Sen (Video inside)
Prime Minister Hun Sen said Cambodia is promoting agricultural sector, particularly the exports of rice. He claimed that Cambodia will not experience food insecurity like in the past.
— Fresh News

Thai flights ‘will reboot trade’
Cambodia’s private sector welcomes the possibility of resuming passenger flights to Thailand, which they say could help alleviate the crushing impact that the Covid-19 pandemic has had on sectors such as retail and tourism.
— The Phnom Penh Post

More than 72,000 motorists issued fines since May 1
Traffic police have fined more than 72,000 offenders since the new Road Traffic Law was strictly enforced from May 1 up to Monday.
— Khmer Times

Cambodian Garment Factory Owners Urge Suspension of Minimum Wage Talks Citing Outbreak Impact
Garment factory owners on Tuesday urged Cambodia’s government to postpone annual negotiations on minimum wage, saying the sector needs to first recover from the devastation of the coronavirus pandemic, while unions sought to downplay the severity of its impact and demand that talks go ahead.
— RFA

Workers to receive subsidies
The Ministry of Labour and Vocational Training has announced a seventh-round of subsidy payments for 12,000 suspended workers.
— The Phnom Penh Post

Cambodia’s Landmine Casualties Drop 42%
At least 36 people were killed and injured by landmines and unexploded ordnance (UXO) within six months of 2020, a decrease of 42 percent, compared to the same period last year, according to the First Vice President of Cambodian Mine Action and Victim Assistance Authority (CMAA) Ly Thuch.
— Fresh News

RCEP, in which Cambodia will be a signatory, expected to be signed by late 2020
Viet Nam has worked closely with ASEAN and the six partner countries to promote the early conclusion of full negotiations of the RCEP agreement, and prepare for signing in November.
— Khmer Times

Cambodian Government Sends $25M Per Month to Authorities Nationwide to Distribute to Vulnerable Households during Covid-19: PM Hun Sen (Video inside)
Cambodian Prime Minister Hun Sen said that the government has sent approximately USD 25 million per month to distribute to vulnerable households affected by Covid-19 and USD 125 million have been allocated for a five-month plan.
— Fresh News

NEC destroys 22 million ballots kept since 2012
The National Election Committee (NEC) on Wednesday destroyed over 22 million ballots papers used in elections from 2012 to 2017 after they were legally retained for between three and six years.
— The Phnom Penh Post

Intervention sought in land dispute
Some 50 people representing more than 100 families locked in a land dispute in Kampong Thom province’s Kraya commune, in Santuk district, travelled to Phnom Penh to submit a petition at the National Assembly, the Prime Minister’s Cabinet and the Ministry of Interior on Monday and Tuesday.
— The Phnom Penh Post

Stronger Measures Needed Urgently to Tackle Wildlife Poaching in Cambodia
Another guar was found dead in hunter’s trap in the Samkos Mountains in Pursat province on June 23, according to the Ministry of Environment.
— Cambodianess

Demarcation ‘complicated’
Demarcation of the remaining borders with Vietnam, Thailand and Laos is turning out to be complicated in terms of technical and legal documents, but substantial progress is being made, a top official said.
— The Phnom Penh Post

Japan embassy to hold online Tanabata 2020 soon
The Embassy of Japan in collaboration with the Cambodia-Japan Cooperation Centre and the Japan Foundation Asia Centre will hold an “Online Tanabata 2020” on the second week of July.
— Khmer Times

EAC: No power shortage this year
The Electricity Authority of Cambodia (EAC) said the Kingdom will not face a power shortage during this year’s dry season, as demand for electricity had declined due to the Covid-19 pandemic.
— The Phnom Penh Post

Use of police plates scrutinised
Phnom Penh Municipal Police chief Sar Thet has warned that legal action will be taken against anyone who continues using police vehicle plate numbers without proper authorisation.
— The Phnom Penh Post

29 kg Of Drugs And Guns Seized Over Thai Border
Two people were detained for ready to cross border into Cambodian territory.
— CNE