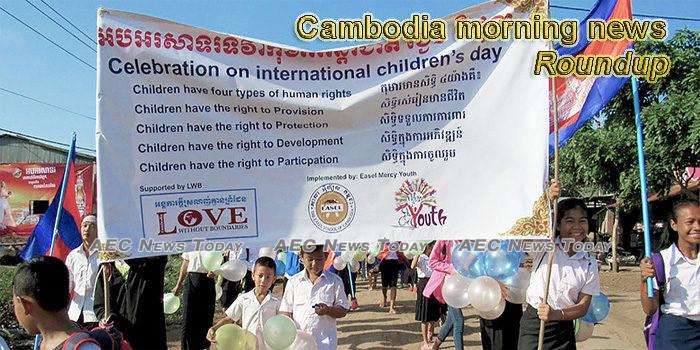 PM Hun Sen Warns to Arrest Anyone Propagandising to Stop Circulating $1, $2, $5 Notes (Video inside)
Cambodian Prime Minister Hun Sen warned to arrest anyone who propagandises not to use USD 1, USD 2 , and USD 2 notes in Cambodian market.
— Fresh News

No Flights Available for Cambodians Stranded in Malaysia
The 150 Cambodian migrant workers and students who had been working and studying in Malaysia remain stranded amid the Coronavirus Disease 2019 (COVID-19) pandemic.
— Cambodianess

Cambodia arrests 8,864 suspects, seizing 259kg of drugs in 5 months
The number of people arrested in Cambodia for allegedly involving in illicit drugs rose by 28 per cent in the first five months of 2020, according to the Interior Ministry’s anti-drug department report released on Monday (June 1).
— The Star

Kingdom set to contain community virus transmission
The World Health Organisation (WHO) announced in a Friday report that Cambodia is alert and ready to respond to a larger-scale community coronavirus transmission and has demonstrated effective rapid response to initial cases.
— The Phnom Penh Post

Cambodian PM Expresses Concern over Second Wave of COVID-19 Infections
Samdech Akka Moha Sena Padei Techo Hun Sen, Prime Minister of the Kingdom of Cambodia, has reiterated his concern over the second wave of COVID-19 infections in the country while congratulating his fellow citizens and competent authorities for their participation and efforts in the fight against this pandemic.
— AKP

Pork prices rise sharply in the region due to ASF
The price of live pigs and pork has risen sharply in the region now that the quantity of pigs has dropped due to the African swine fever (ASF), Swine Raisers Association of Thailand vice-president Wiwat Pongwiwatchai said last week.
— The Phnom Penh Post

Cambodia reaffirms commitment to host the Asia-Europe Meeting (ASEM) Nov 2020
Cambodia has reaffirmed that it will host the Asia-Europe Meeting (ASEM) Summit in November, said Luy David, Secretary of State of Ministry of Foreign Affairs and International Cooperation, stressing that it will be the world’s largest summit post-COVID-19.
— Khmer Times

DEY project to ‘brighten’ youths’ future
A signing ceremony for a joint programme entitled Decent Employment for Youth in Cambodia (DEY) was held between the UN in Cambodia and the Swiss Agency for Development and Cooperation (SDC) on Monday to enact phase two of the four-year $4 million programme.
— The Phnom Penh Post

World Bank Outlines Two Scenarios for Cambodian Economy
The World Bank expects Cambodian economic activity to shrink 1 percent this year before rebounding 6 percent next year under its baseline scenario for the country.
— AKP

PM Hun Sen calls to intensify children’s programs and protection
Prime Minister Hun Sen has given his message on the occasion of the 71st anniversary of International Children’s Day and Cambodian Children’s Day on the same date of June 1 and the 19th anniversary of the World Day against Child Labour on June 12 as part of recognizing the important role of children in the society.
— Khmer Times

‘Angkor-era Holy Cow’ discovered in P Vihear
A sacred statue of a cow that was discovered on an ancient hill in Preah Vihear province on Saturday is being kept at the local museum following a short ceremony on Monday.
— The Phnom Penh Post

New Cambodian Ambassadors Committed to Protect the Nation’s Interests
Newly appointed Cambodian ambassadors have been committed to do their best to protect the independence and sovereignty as well as the supreme interests of the nation.
— AKP

Angkor Resort Earns Some US$18 Million in First Five Months
Angkor Archaeological Park in Siem Reap province earned only US$18 million from the entrance ticket sales in the first five months of this year.
— AKP

Restoration of Sihanoukville’s Roads Almost Complete
Prime Minister Hun Sen on June 1 announced that construction of a 34-road network in Sihanoukville province is now 90 percent completed. These roads, Hun Sen said, form part of a strategic plan to make Sihanoukville a civilized tourist destination and develop its potential as a commercial city.
— Cambodianess

UN bodies call for drug centre closure
Thirteen UN entities on Monday issued a joint statement calling on countries in Asia and the Pacific to close all compulsory drug detention and rehabilitation centres to prevent the spread of Covid-19 and other diseases and some forms of human rights violations.
— The Phnom Penh Post

Charity program benefits people with disabilities
The president of the Music Association of the Disabled has requested the Ministry of Cult’s to mobilise and offer aid program to his organisation as the COVID-19 pandemic is greatly affecting the livelihood of his constituents.
— Khmer Times

Six suspects detained for robbery, drug trafficking
A group of six suspects were sent to the Phnom Penh Municipal Court for questioning on Monday after they were detained for allegedly robbing travellers and selling drugs, court spokesman Kuch Kimlong said.
— The Phnom Penh Post

Man on run after family murder
A mother and daughter were found dead amid a pile of burnt rubble after a house in Thma Koul district’s Bonsai Treng commune in Battambang burned down at 1:40am on Sunday.
— The Phnom Penh Post

Teenage Girl Slashes Motodop, Alleges Rape
At about 8 am on 01 June 2020, a man was injured after being attacked by a young girl with a meat cleaver. The incident occurred in Reaksmey Chumpouvon guesthouse, Village Prey Pring 2, Sangkat Chom Chao 3, Khan Por Senchey, Phnom Penh.
— CNE