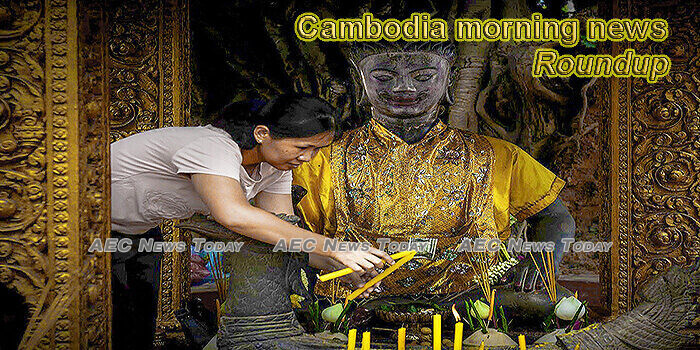 Cambodia’s tourist hotspot bans dog meat trade
The Cambodian tourist town of Siem Reap has banned the dog meat trade, a victory for animal rights campaigners who describe the area as the “lynchpin” of an industry that slaughters millions of creatures each year.
— Channel News Asia

Cambodia bolsters tourism sector with tax incentives, emphasises human resource development moving forward
The landscapes, world heritage sites, and hospitality of Cambodia have drawn increasing numbers of visitors in recent years, and at the beginning of 2020 the country was primed to see the continued growth of its tourism sector well into the new decade.
— Bangkok Post

City Hall Allows KTVs and Nightclubs to Reopen “As Restaurants”
Phnom Penh Municipality on Tuesday (June 7) announced that karaoke bars (KTVs) and nightclubs must turn their businesses into restaurants if they wish to remain open.
— Cambodianess

More restaurants volunteer to relocate from Angkor Wat
In cooperation with the Apsara Authority and in the spirit of contributing to the development of tourism at Angkor Wat, four restaurant owners voluntarily relocated their premises on Sunday.
— Khmer Times

New-New Year Dates Being Planned For Late July/August
The Prime Minister of the Kingdom of Cambodia recently advised officials to set up a national holiday for the Khmer New Year, which can be held in late July or early August and last for 5 days.
— CNE

Families told to register for cash handouts
The government has called on poor families to apply to commune authorities for evaluation to receive financial support during the Covid-19 crisis. A $300 million budget has been planned for implementation within a year.
— The Phnom Penh Post

Confusion over Sokha bail terms: Tongues wag over visits to provinces
Pictures of former oppositon party leader Kem Sokha touring two provinces, which were posted online, have started tongues wagging that he is in violation of a court restriction order imposed amid his ongoing treason trial.
— Khmer Times

Australia Continues Supporting Cambodia’s Mine Clearance Efforts Until 2024
Australian government has continued its support for mine clearance activities in Cambodia by providing AU$7.6 million from 2020 to 2024 through the Clearing for Results-Phase 4 (CFR-IV) project.
— AKP

Impact on Kingdom’s rice unclear as US mulls tariffs
The US is deciding whether to remove rice from its Generalised System of Preferences (GSP) programme as growth in imports is affecting US farmers.
— The Phnom Penh Post

JBAC Believes Cambodia Remains a Very Safe Destination for Investment and Tourism
The Japanese Business Association of Cambodia (JBAC) with 270 member companies is looking to increase investment in tourism sector in Cambodia as they believe that Cambodia remains a very safe investment and tourism destination.
— AKP

New Investment Projects Unlikely to Yield Benefits for at Least Six Months
The Ministry of Land Management, Urban Planning and Construction has reported a surge in the registration of construction projects over the past six months.
— Cambodianess

ADB Approves US$250 Million Loan to Support Cambodia’s COVID-19 Response
The Asian Development Bank (ADB) today approved a US$250 million loan to help the Government of Cambodia respond to the coronavirus disease (COVID-19) pandemic, pointed out the bank in its news release AKP received this afternoon.
— AKP

Minister: Prepare disaster response
Minister of Health Mam Bun Heng has told governors of all towns and provinces to instruct the heads of health departments to prepare for upcoming natural disasters.
— The Phnom Penh Post

Pandemic positives: Businesses offer bargains to revive tourism
Despite the relative control over COVID-19 in Cambodia, which has only recorded a mere 141 cases and zero deaths, the virus continues to ravage the economy.
— Khmer Times

New investment law online ‘soon’
The Kingdom’s new investment law is expected to be online soon because the draft law is already 95 percent complete, according to an official from the Ministry of Economy and Finance (MEF).
— Khmer Times

Battambang Tycoon, Provincial Official Charged for Embezzlement, Corruption
A Battambang-based tycoon and deputy provincial governor were charged with embezzlement and corruption on Tuesday for their involvement in land grabs in the province.
— VOA Khmer

Mod Trucker Ordered To Cease
A six wheeler truck, covered with hundreds of portraits of cartoon characters, flickering lights, many rear view mirrors and a souped up exhaust was stopped by traffic police.
— CNE

Man attempts murder, injured by own grenade
A suspect in a Kratie hospital is being kept under police observation after he suffered injuries when attempting to throw a grenade into his in-laws’ house.
— The Phnom Penh Post